Pakistan Telecommunication Authority (PTA) Chairman on Tuesday informed the Senate Standing Committee on Information Technology and Telecommunication that the government intends to launch 5G in the country by 2023.

He also informed the senate committee that talks are underway with StarLink regarding the provision of cheap internet through satellite. He said StarLink has also registered a company in the country with Securities & Exchange Commission of Pakistan (SECP), adding that as soon as regulatory issues are settled, StarLink will launch its service, which will provide cheap internet access, especially to people living in remote areas.

Starlink, the brainchild of American entrepreneur Elon Musk, aims to deliver high speed internet to every part of the globe. The company has a special focus towards elevating connectivity in rural and remote areas while at the same time providing an alternative to the cumbersome task of laying down a fiber network.

The company, as of now, has delivered around 2,000 satellites into Earth’s orbit which serve a customer base of more than 10,000 spread across 14 countries.

In the meeting, National Information Technology Board (NITB) Act 2022 was also reviewed. Officials from the Ministry of IT & Telecommunication (MoIIT) and the NITB told the committee that the purpose of the proposed bill is to make the NITB an autonomous body so that the work of the institution can be further expedited and improved by removing obstacles.

Officials said that being a subsidiary of MoITT, NITB often faces financial delays, which is hurting the fast-growing sector, especially IT.

Senator Dr. Shahzad Waseem asked, “What would be the effect of NITB’s autonomous status and how it would benefit the country?”

Responding to this, the ministry officials said that NITB has been successfully providing quality IT services to the government of Pakistan including e-office, NCOC application and others.

They further added that NITB was also working on human resource development. Before embarking on any project, NITB has to go through a long process to get PSDP grants which is not suitable for a field like IT.  Creating an autonomous body will eliminate unnecessary delays as well as improve the decision-making process.

The NITB is a government body that was formed on 11th August 2014, by merging Pakistan Computer Bureau (PCB) and Electronic Government Directorate (EGD)  to address the operational challenges of all government departments and Ministries.

NITB specializes in key automation, design, development, and implementation of robust IT technologies to promote the e-governance culture in all public departments and holistically develop plans, technologies, and infrastructures to boost the performance of the public sector.

Chairman Committee Senator Kauda Babar told the committee members that freelancers in Pakistan are generating millions of rupees in the country without any government support. He further added that lower and middle class youth are associated with this sector.

Ministry officials responded by letting the committee know that they were in constant touch with freelancers and other stakeholders and efforts were being made to solve the problems of young entrepreneurs.

They further quoted lack of trust by freelancers on the government officials as the primary reason for delay in the process of registration of freelancers.

The Secretary Ministry of Information Technology informed the committee members that various training programs have been launched in collaboration with universities across the country to build the capacity of young graduates in order to prepare them for market needs.

“If freelancers are registered, they will be able to enjoy tax exemptions and other additional benefits.” The Secretary added. 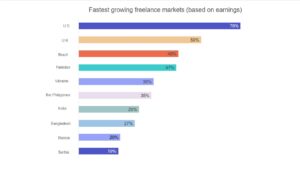 As per CNBC, Pakistan, driven by its young population, is the fourth fastest growing freelance market.

As per MoiTT, Pakistani freelancers generated $216.788 million by exporting their services in the first half of fiscal year 2021-22 from July to December 2021, an increase of 16.74 percent from the same period last year.