Pakistan’s foreign bonds have plummeted in price and yields skyrocketed all last week with no let up in sight. 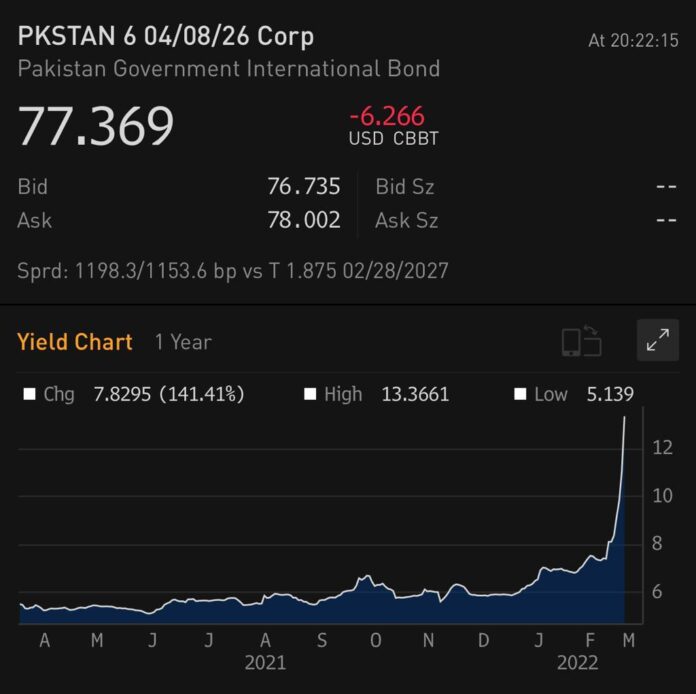 Turmoil in the foreign capital markets hit Pakistan’s bonds all last week with sharp sell offs coming on Friday. Bid yields on Pakistani bonds soared past 13 percent, touching as much as 15 per cent in some cases, with the largest increases coming on the last day of the week. Prices also plummeted as funds moved to offload their holdings amid rising uncertainty with drops ranging between $5.75 and $10 on Friday by some accounts. The weekly price drops ranged from $13 to $20 according to data provided to Profit by multiple bond traders.

The Wapda bond that matures in 2031 is not a sovereign issue and saw the sharpest increase in its yield and drop in its price. Its bid yield rose above 15pc and the price dropped by $12 on Friday with a weekly drop of $24.

“It’s risk-off in the markets” one trader told Profit from his office in London. Russia and Ukraine, both investment grade until last week, saw their ratings drop to junk status as all funds moved to offload their holdings. This drove down risk appetite.

“Pakistan is not looking like a good asset in this environment” one trader said. “When you have the Prime Minister announcing power and fuel price caps on the eve of an IMF visit, coupled with the poor optics of the Prime Minister visiting Putin on the day of the invasion, uncertainty is bound to rise” he went on.

Pakistan’s gross external financing needs are estimated by the IMF around $30 billion for the ongoing fiscal year. Next year these are projected to rise to $35 billion. So far the State Bank has been assuring its creditors that all of these are “fully financed”. An update on this assessment will be sought by these creditors after the monetary policy announcement scheduled for Tuesday (March 8).

“If your yield is above 10pc, as per market convention it more or less means you have lost market access” one trader says.

Another trader underlines the global nature of the sell-off. “Everything is under stress” he says, “some from contagion risk from Europe, investors feeling they need to be reducing their exposure, it’s all very illiquid at the moment.”

Under these circumstances, he continues, investors start focusing in on any vulnerability they can see in the country’s debt profile. “Pakistan’s spread to Egypt has been relatively stable for the past few months” he says. “But in the past five days these have widened, which suggests the market is wondering how the relationship with the IMF will develop. Pakistani holdings seem marginally overweight by our assessments” he adds.

Financial markets were already clouded by the prospects of rate hikes in the United States before the invasion. Pakistan entered the market at a bad time in late January to raise $1 billion from a Sukkuk offering. The bookbuilding exercise for that offering took place days after an IMF mission concluded talks but before the board had sat down to grant formal approval, triggering questions in the market about what the rush was for Pakistan to access these funds.

Talks with the IMF for the 7th review of the ongoing Extended Fund Facility (EFF) began on Friday and are expected to continue through Saturday (March 5). “The authorities and the IMF will discuss recent developments, the merits of the recently adopted relief and industrial promotion packages, and other measures to promote macroeconomic stability” the Fund’s Resident Representative in Pakistan, Esther Perez Ruiz tells Profit.