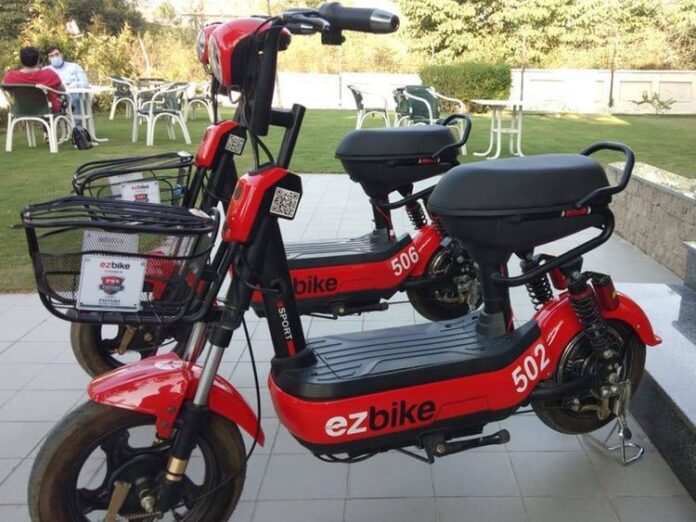 The pre-seed round was raised from Pakistan’s i2i Ventures, Walled City Co, GroundUp, and leading angels in the United States, including a tech billionaire whose name was was not disclosed.  This is the first raise for an electric mobility startup in Pakistan.

Profit has seen internal documents shared by the startup that confirm the amount raised in the round was $1 million.

ezBike was launched in October 2020 as Pakistan’s first electric scooter sharing service by Mohammad Hadi, a former investment banker, and Ali Moeen, a software executive. Since its inception, the startup claims it has on boarded over 100,000 customers who can book an ezBike parked around the city of Islamabad.

The users locate the bikes through the ezBike app, reserve and operate the electric scooters all by themselves.

“We have been able to achieve this number of users without anything spent on marketing, which is a validation of our model,” says Muhammad Hadi, the CEO of the startup.

He further says that being electric, ezBike scooters cost 30% less than the average bike ride on non-electric services.

“Because of expertise in assembling, operating and maintaining electric scooters at scale, we feel we are very well positioned to address the broader market opportunity of transitioning Pakistan to electric vehicles within 2 wheelers,” says Hadi. “That does not necessarily have to happen only through a sharing service which is why the pre-seed we have raised and the uses of this capital are to launch our own brand of electric scooters which will be offered for sale starting this summer.”

He attributes the sluggish growth in electric scooters to the high price of these vehicles.

The funds will consequently be used to build a comprehensive ecosystem of its own for electric two-wheelers, including an electric scooter assembly facility, and low-cost lithium-ion battery production which will lower the cost of electric scooters for customers.

“What we are also doing is we are building a battery swapping network through which customers would be able to rent the batteries.”

The company will begin offering electric scooters for sale this summer and plans to initially pilot its solution with one of Pakistan’s leading delivery companies.

Misbah Naqvi co-founder and GP at i2i Ventures said, “We are proud to back the ezBike founders as they focus on addressing the urgent and significant issue of climate change and pollution in Pakistan, while providing consumers affordable options to purchase and operate electric scooters. Hadi and Ali have demonstrated a deep understanding of the EV opportunity and how to address the needs of the Pakistani consumer and we are excited about their future plans.”.