The SBP is controlling car imports

Here’s what that means 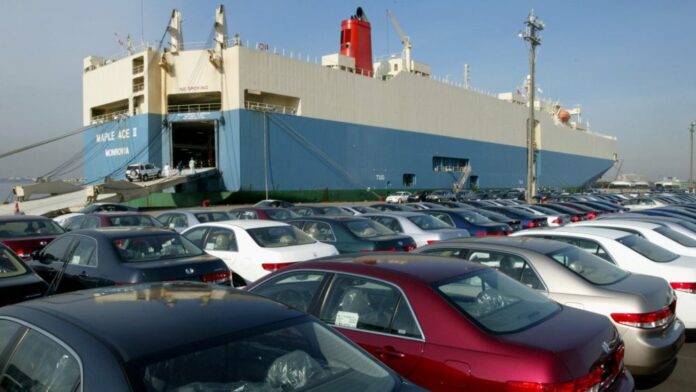 The Rupee’s worrying free fall has led to the automobile industry being caught in the eye of the storm. Designated as one of the main culprits in the Rupee’s fall, the State Bank of Pakistan’s (SBP) mandate now includes oversight of the sector’s import activities.

Nearly a month ago, the SBP released a circular addressed to banks, letting them know that they needed to seek permission before performing transactions in dollars for the import of CKD (completely-knocked-down) units of cars. This meant that auto assemblers in the country will now need express permission from the SBP to assemble them in the country.

The effects of this are far reaching. Senior industry executives had already been predicting that the upcoming year would see a serious rise in the prices of cars, particularly because of the dollar shooting up, and a fall in demand. The President of Automotive Division at Lucky Motors Corporation, Muhammad Faisal, has told Profit that a fall in sales by 40-50% compared to last year is expected, and other leading executives in the industry have expressed similar sentiment.

For the assemblers, the immediate worry is hammering out a quota system with the SBP, under which every manufacturer gets a certain slice of foreign exchange to import CKDs. However, there are already disagreements within auto manufacturers over what formula should be used to calculate this quota. For consumers, it means rising prices of cars, a serious dip in demand, and the end of the practice of ‘on’ prices.

What Exactly Has Happened

Any understanding of this matter necessitates an understanding of how automobiles are imported in Pakistan. They are either imported already assembled or as ‘completely-built-units’ (CBUs) e.g. the Audi e-tron or they are imported in parts and then assembled in Pakistan – as ‘completely-knocked-down’ (CKD) units e.g. the Honda Civic. The import of CBUs into Pakistan has already been banned under the incumbent government’s import ban on luxury items and now policy-makers seek to ‘fix’ the CKD market.

The crux of it is this – the government is trying to fight the current account deficit and in doing so has sought to  curtail the imports of cars into the country through the SBP. The SBP will now decide on a case to case basis how many and which components needed to make a car are imported.

Dear reader, if you are still confused, then let us explain with an example. Pak-Suzuki Motors may request the import of 100 side-mirrors for its cars. Normally, it would obtain them within a standard period by engaging the relevant government department. The SBP has now added a layer of red-tape by mandating all transactions for these semiconductors to obtain its approval.

Now how long this approval takes is anyone’s guess but is enough to have the automotive industry up in arms. The question you may ask then is, was this necessary? Well the State felt so as they probably saw that Pakistan imported $1.6 billion worth of CKDs in April.

What Is The Automotive Industry Thinking In All of This?

Well, to say the automotive industry was caught off guard would be an understatement. However, in conversation, many of those who talked to Profit cited how they were already preparing for a turbulent year ahead.

The auto industry, already expecting lower demand because of the economic crisis and rising car prices, is aware of the realities.  “The industry, as a whole, is cognisant of the macroeconomic environment. As such, forcing the government to rescind its ban on CBUs is not a major concern. However, the government should provide manufacturers with CKD import quotas instead of handling import approvals on a case-by-case basis,” says one senior automobile executive.

In response, the industry is essentially demanding that instead of dictating on a car-to-car basis, the SBP give assemblers a set amount that they can spend on importing CKDs, and let them determine themselves which model they want to import into the country. “The government can reach out to OEMs and tell them they want us to reduce overall CKD imports. They can give quotas and then allow OEMs to structure their portfolio within that quota. This will provide greater confidence and stability rather than a blanket application of administrative measures.

Of course, there is then an issue of how the quota should be calculated. Our victims are facing their own prisoner’s dilemma as there is disagreement over what the best way to calculate the quota is.

Some manufacturers, such as Lucky Motors, are in favour of the quota being calculated in accordance with how different car manufacturers performed in the previous year. This would be ideal for companies like KIA and Toyota, which had breakthrough years. Other manufacturers would argue that it should be dependent on the capacity of the assembly line – such as Hyundai which doubled its capacity just last year.

Others still like Changan will also be against basing the quota on performance since they have only just introduced new models of their cars which they did not have in the market to compete with KIA, Toyota, Honda, and others before.

MG and Audi may just want to have CBUs be allowed back into Pakistan.

What does this Technical Battle of Goliaths Mean for Everyone?

Let us just put this out there again – cars are about to get more expensive. Probably very expensive.

With imports being tightly curtailed and supply low, the natural response will be for prices to go up. Revenue volumes are going down, so profit margins will have to be increased via a price hike.

The immediate effect of the SBP’s measure is that demand will outstrip supply in the short-run, this is because if anyone has decided they want to buy an automobile in this market then a slightly higher price is unlikely to deter them. Now if a lot of people behave that way then automobile companies will have to ration demand in some say, and what better way than increasing prices?

In the long run, prices will sustain their highs if not get higher. This is because the automobile industry is reliant on volume. Muhmmad Faisal agrees with this and cites volume as perhaps one of the most important metrics in decision-making at the top-level of all automobile manufacturers. However, the SBP has thrown a spanner in the works with the automobile sector’s dream of high volumes. Thus, automobile manufacturers are likely to spike prices in order to compensate for lower volumes with higher profit margins.

However, dear reader, you and I are not just collateral damage in this entire matter. The automobile industry is effectively going kamikazi with their possible price hikes. At the new prices, people will not buy as many cars as they were buying before. Profit asked Muhammad Faisal about this particular situation to which he repsoned “I hope I am wrong but these increases will come after the reduction in auto-financing which accounted for 30-40% of volume. Thus, in my opinion there will be a 40% dip in volume at the very least”

Is There Any Alternative Course of Action?

Now in this bloodbath, no one is safe.

In its bid to curtail leakages, the State is actually foregoing potential revenue that it could have otherwise earnt through import levies. Muhammad Ali Tabba, in an interview, believes that increasing import duties is a better alternative to the import ban. “This will both assist the government in combating the current account deficit (CAD) and also raise revenue to meet the Rs 200 Billion surplus targeted in the budget for FY 2022-23,” he says.

“The ban only delays the inevitable. The global commodity super-cycle will lead to demand destruction. He cites reduced purchasing power and predicted price increases due to increased cost of production for manufacturers for his claim.”

Dr Ishrat Hussain voiced similar concerns to Profit, who says “banned goods are those that are primarily consumed by the most well-off segments of Pakistan. Increasing the duties would allow the government to recoup lost forex.”

“Strictly in terms of the automobile sector, the ban on importing CKDs is counterproductive. The rupee’s devaluation with a steady flow of CKDs required for local assembly provides the opportunity for import substitution”

Muhammad Ali Tabba and Suneel Munj, like Ishrat, also critique of the import ban in the context of the automotive sector. Both, in their own capacity, cite the 2018-19 automotive market as an example of a rational automotive market.

“Government intervention distorts the automotive sector, which was otherwise on the precipice of self-correction. He cites price reductions by Peugeot and KIA to some of their models as examples. The import ban, in his opinion, creates deadweight losses,” says Pakwheels founder Suneel Manj. According to Manj, after self-correction, there would have been a downward pressure on prices and automobile manufacturers would naturally import fewer CKDs.

The true fallout of these measures on the macroeconomy and national exchequer, though expected, will only unfold within the coming weeks to months. The severity will vary. They may not be as bleak as the prospects painted by the Pakistan Automotive Manufacturers Association (PAMA). However, it would also be remiss to not forego the concerns highlighted by the aforementioned individuals.

This writer does not have a final verdict on the matter. However, it is in both the State and the sector’s interest to meet each other halfway with some form of mutual compromise.