List of items to be exchanged for barter trade 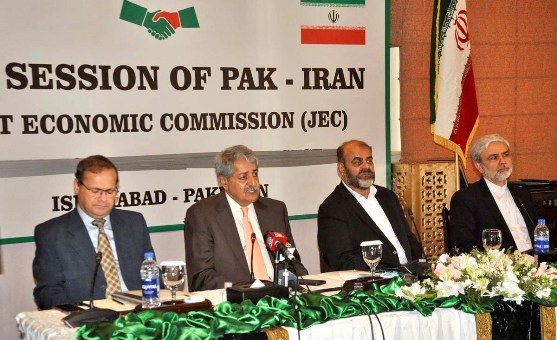 ISLAMABAD: Federal Minister for Commerce Syed Naveed Qamar on Thursday said that Iran and Pakistan will give final shape to the proposed bilateral Free Trade Agreement (FTA) in the next six months.

Qamar hoped that free trade will increase and taking the volume of bilateral trade to $4 billion after the two countries sign the FTA, adding that the current trade volume does not commensurate with its true potential.

He added that an agreement will be signed for promoting transit trade in the next three months, through which free economic zones will be established in the two countries.

According to the details, APP’s Managing Director Akhtar Munir and the Iranian Ambassador to Pakistan Syed Mohammad Ali Hosseini signed an agreement related to media co-operation.

The third agreement was signed for the promotion of tourism, which was signed by representatives of the respective ministries of the two countries.

The fourth agreement was signed by the National museums of the two countries for the promotion of mutual cooperation.

Naveed Qamar said that under the FTA, both sides would negotiate to reduce tariffs and exchange trade lists in different sectors.

He informed that for the promotion of transit trade, it had been decided to establish six border markets, in which, the work on the establishment of three had already been started while work on the other three will also start soon.

The minister said that it was time for final agreements and practical work for which both the countries had agreed and added that national airlines of the two countries had also expressed their willingness to promote mutual cooperation.

“Since its inception in 1984, we are now holding the 21st Session of the JEC, which is a clear indication of the endeavors of both the countries to sustain and foster our economic relations”, he added, recalling that the JEC provides an institutional framework for a regular review of economic relations and identification of new opportunities for mutual cooperation.

Syed Naveed Qamar said that Pakistan placed Iran at a very high level of importance and appreciated its direction towards market-based reforms. “Pakistan looked to the Iranian market and Iranian investors as it offered a very friendly trade and investment environment in Special Economic and Industrials Zones under CPEC,” he added.

“I request the two sides to implement the Preferential Trade Agreement (PTA) in letter and spirit, and remove Tariff and Non-Tariff Barriers in order to boost trade volume between both countries” he said.

He emphasised that the five Years Strategic Trade Partnership Plan needed to be renewed for next five years (2022-2027) and both the sides were working in that regard in this 21st Session of JEC.

Talking to media persons, Iranian Minister for Roads and Urban Development, Rustam Ghasemi said that many fruitful discussions regarding many fields including energy and trade had been held between the two parties.

He pointed out that transport, trade and energy were very important for the economies of the two countries.

He informed that four different agreements that were signed included agreements on maritime cooperation, media, tourism and the national museums.

Meanwhile, National Food Security Minister Tariq Bashir Cheema said that Pakistan and Iran will soon begin bartering, under which Pakistan will get apples from Iran by sending them oranges.

During a meeting with Iranian Deputy Minister for Agriculture, Abbas Askarzada in Islamabad on Thursday, he said that the two countries will soon exchange lists of items which can be traded on a barter basis.

Cheema called for removing obstacles in bilateral trade between the countries, especially in the field of agriculture. “Relations between Pakistan and Iran are entering into a new era based on mutual benefits, and cooperation in the agriculture sector could ensure food security in the two countries,” he said.

The Iranian deputy minister agreed to the proposal and said that Iran is ready to increase cooperation with Pakistan in the agricultural sector. “Iran will meet the agricultural requirements of Pakistan and introduce its agricultural products in Iran,” he stated.