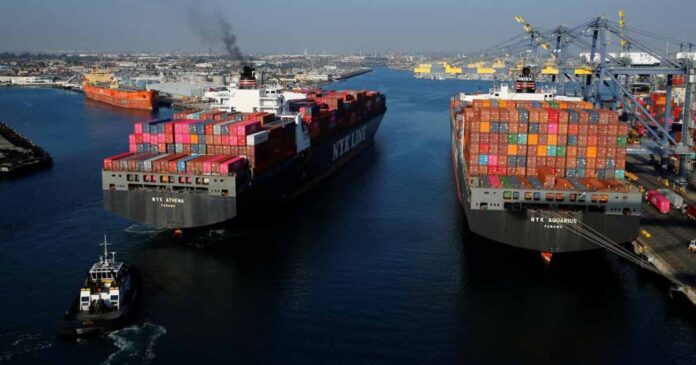 ISLAMABAD: Pakistan’s goods and services trade with the United States (US) witnessed a surplus of 23.21 percent during first month of current financial year (1MFY23) as compared to the corresponding period of last fiscal year.

The trade surplus during the period under review was recorded at $335.091 million against $271.952 million last year, showing 23.21 percent growth.

The exports to the US were recorded at $499.686 million during July this year against $503.118 million during the same month last year, showing a nominal decline of 0.68 percent, the State Bank of Pakistan (SBP) data revealed.

Similarly, on a month-on-month (MoM) basis, exports to the US also witnessed a decrease of 22.03 percent during July this year as compared to US $640.935 million in June the same year.

On MoM basis, the imports from the US dropped by 51.29 percent during July this year as compared to US $337.964 million in June this year, the data further revealed.

In a separate development, Finance Minister Miftah Ismail while meeting with Australian High Commissioner Neil Hawkin stressed the need to enhance the bilateral trade level between both the countries. He regretted that trade between the countries currently stands at sub-optimal level, adding that and a lot of potential needs to be explored.

Hawkins along with First Secretary Ashleigh Light had called on the minister in the federal capital.

Miftah also apprised the High Commissioner about the latest economic developments and policies of the incumbent government aiming to promote trade and investment for facilitation of domestic as well as international investors.