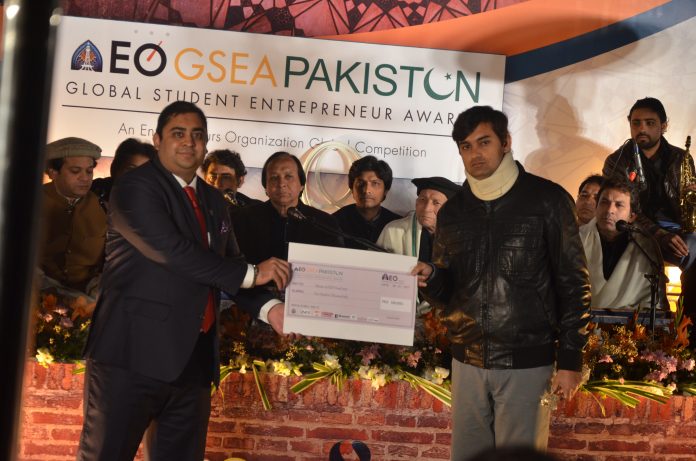 Entrepreneurs’ Organisation is a non-profit organisation which took over the GSEA initiative from the University of St. Louis in 2006 and brought it to Pakistan for the first time last year. The competition is held every year and has chapters in 57 countries around the world. It provides exposure, mentorship, guidance and networking opportunities for the participants so that the culture of student entrepreneurs can be promoted across the globe.

Eight finalists competed against each other; they presented their business plans and models to a panel of five judges comprised of entrepreneurs and corporate executives from various fields. The prerequisite for the competition registration was that the student must be currently enrolled in an undergraduate program and being a founder of an operational business for at least six months. Thus, the competition wasn’t about how appealing a business idea is, but rather how an existing business has the scope to grow and impact the society positively.

A total of five awards were given out to the studentpreneurs. Muhammad Asad Raza emerged as the winner of the competition and bagged the prize money of Rs 500,000 in addition to an all-paid trip to travel to Frankfurt, Germany, to compete at the GSEA Global Finals in April 2017. Raza is an undergraduate student at National University of Sciences and Technology (NUST) and has his business incubated at the Lahore University of Management and Sciences (LUMS) Centre for Entrepreneurship. He won the competition for developing a fully operational wearable device for patients with tremors/Parkinson’s disease. The device is connected to a mobile phone to monitor the patient and the data can be shared with doctors. The device is under clinical trials in many leading hospitals of the country. Raza has also won the Asia Pacific ICT Award (APICTA) in Tertiary Student Project Category in Taipei, Taiwan, on December 6, 2016.

Uzair Haider from the University of Engineering and Technology (UET) scored the first runner-up position and the Technology Innovation Award, including prize money of Rs 200,000. Haider is the founder of IoTech and has developed the world’s smallest device for home automation through which users can control different appliances at their homes and offices.

The second runner-up award was given to a seventeen-year-old Babar Khan Akhunzada from Institute of Management and Sciences, Peshawar. He was the youngest participant at the competition and his company, Security Wall, provides security to banks, multinationals, hospitals and big data companies’ servers from potential hackers. He was also a finalist at the Startup Istanbul competition last year.

The Social Impact Award was given out to Maria Aftab from NUST for her business Sionser, which has developed a device for identification of water quality in rural areas of Pakistan.

A total of 59 students from 19 universities across the 12 cities of Pakistan participated in the competition.

Before the awards were given out, Naz Mansha, CEO Nishat Mills Ltd, who was the guest of honour at the event, delivered a keynote address wherein she encouraged the younger generation, especially women, to take control of their lives and promote entrepreneurship.