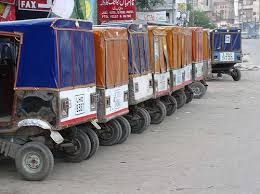 Islamabad: Japan has traditionally been a major market for car buyers, but things are looking up for Pakistan as a local company has started exporting its three-wheeler rickshaws to the country.

Sazgar Engineering, a manufacturer of 4-stroke CNG auto rickshaws, has been exporting its rickshaws to Japanese markets.

Despite a strong industrial base and a thriving automobile industry, Japan is importing Pakistani traditional rickshaws as the focus of citizens shifts to cost-effective commute.

According to Sazgar Engineering Sales Head Ismail, Pakistan’s traditional, colourful truck and vehicle art is famous worldwide and locally manufactured rickshaws are famous in Japan for a similar appeal.

He said that Japanese are extremely careful with road safety, which means these rickshaws do comply with their standards. It is the only three-wheeler in the history of Japan to be allowed on Japanese highways, he added.

“Our engines conform to all laws, rules and regulations of the government of Pakistan. These vehicles are supposed to cruise at 50km/hour,” said Ismail.

For years, Pakistan has been importing automobiles from Japan.

Car manufacturers like Toyota, Honda, Suzuki and Nissan have become household names, not just in Pakistan but across the world. Responding to a question, he said the automobile industry needed to capitalise on rickshaw market and expand its export.