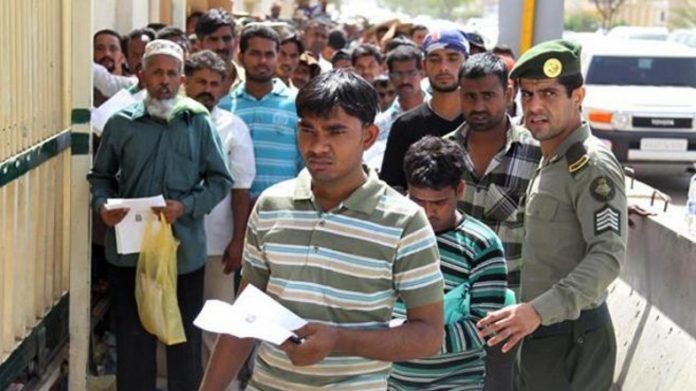 The tax increase on foreign workers in Saudi Arabia has hit Pakistani laborers and professionals alike. Amid the shaky developments, new taxes were implemented on July 1, 2017.

The council of ministers approved the new fees as part of the fiscal balance program adopted in December 2016.

A source in Riyadh – working as an IT professional in the accounts department of one of the biggest construction companies in Saudi Arabia – anonymously told Pakistan Today that the companies are being discouraged from employing foreigners through implementing new taxes.

Moreover, companies, where the number of non-Saudi employees exceeds the locals, will have to pay a monthly fee of SR 200 for every foreign employee. Starting next year, the fee will be increased gradually until 2020.

Additionally, the companies where foreign workers do not exceed the number of Saudi staff, the tax will be reduced rather than being waived off.

The tax will be imposed on expatriate workers who are more than the number of Saudi workers in 2018 in the companies of all sectors.

Private companies and institutions have started advising their workers about the new government taxes. Many companies have warned their employees that the taxes would be deducted from their salaries. Many of the workers have started, either sending their families back to Pakistan or thinking about quitting their jobs and shifting to Pakistan.

The new taxes would affect the dependents’ travel to their homeland. Exit (Kharooj) and entry (Dakhool) taxes would be charged at the rate of per dependent per month.

Furthermore, the Iqama – a document compulsory for working in KSA – will also be extra charged with the dependents taxes at the time of renewal.

Earlier, Saudi Arabia also introduced a visit visa fee which used to be “zero” only 8 months ago. Furthermore, the fees for Umrah and Hajj were increased on the same day.

Hamid, who works as a manager in the supply department of a company said, “I am living in Saudi Arabia since ten years with my wife and 3 children. My children were born in here. I believe new taxes are imposed on expatriates to discourage any foreign remittances we send to our elderly parents in Pakistan. The government wants us to spend all we earn in Saudi Arabia rather than having any savings or sending money to our parents.”

I have been saving money for months to visit Pakistan, but that money will be used to pay extra taxes now, he further told Pakistan Today.

Tahir Malik – a professor of IR at NUML – showed his concerns for white collared Pakistani expatriates. “These taxes would only affect the hardworking Pakistanis working in Saudi Arabia. Saudis must know that these Pakistanis are from same Pakistan as the General Raheel Sharif, who is heading their fight on terror.”