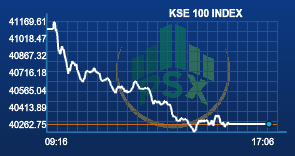 LAHORE: The Pakistan Stock Exchange (PSX) bleed as indices struggled to keep up despite earning reports. Volumes remained low extremely low as the country faces an uncertain future amid the political tug-a-war. Investors played it safe and kept their distance from the market.

Profit reported last week that the political uncertainty has erased $ 18.5 billion from PSX since May this year and KSE 100 has not been able to cross its high of 52,876.46 points on May 24, since.

While talking to Profit a senior market analyst said “The government needs to get its act together if the market is to recover. Since the removal of former prime minister Nawaz Sharif, the market has struggled as investors are scared to invest and this is extremely unhealthy for the market. The market has lost billions in value and it is about time we put an end to this political chaos.”

All sectors got hammered. The Cable and Electrical Goods Sector depreciated 3.57 per cent with Singer Pakistan (SING -4.99 per cent) and Pak Elektron Limited (PAEL -4.99 per cent) at lower lock.

Among the major results announced were Lucky Cement Limited (LUCK -5.00 per cent). The scrip closed at the days minimum possible price of Rs 510.26. It posted a quarter-on-quarter contraction of 7 per cent in sales which amounted to Rs 11.20 billion. This is a little above Rs 10.57 billion declared in the same period last year. Net profit stood at Rs 3.02 billion with per share earnings of Rs 9.33 less than Rs 10.01 in the same period a year back.