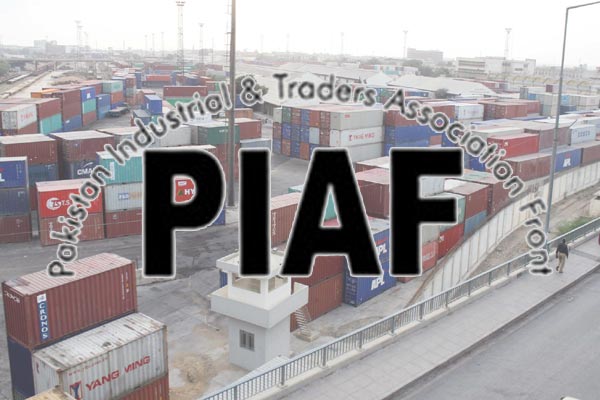 LAHORE: Chairman Pakistan Industrial and Traders Associations Front (PIAF) Irfan Iqbal Sheikh has reiterated the demand of regulatory duty’s withdrawal on the import of necessary items including industrial raw material. He called for an immediate consultation over the issue of regulatory duty to ensure business-friendly decisions.

In a statement, along with Senior Vice Chairman Tanveer Ahmed Sufi and Vice Chairman Khawaja Shahzeb Akram, PIAF chairman Irfan Iqbal Sheikh agreed that unnecessary imports are widening the trade deficit, but asserted that extensive consultation between public and private sector is a must to bring clarity to the issue of regulatory duty.

He observed that the decision will further increase the practice of under-invoicing and promote smuggling. He said that government, instead of promoting export by resolving the fundamental issue of high cost of doing business particularly in Punjab, has taken impractical and illogical measures to control trade deficit.

Chairman said the declining exports and widening trade deficit posed a serious threat to economic growth and required to be tackled on a priority basis. The government should also find a lasting solution to the problem of high prices of foodstuffs, as the high import duty also causes high inflation.

Irfan Iqbal Sheikh said that Pakistan’s external debt was primarily increasing because of the government’s inability to enhance exports and attract foreign direct investment. He warned the government that Pakistan has been sliding down towards debt trap and might need another bailout package of International Monetary Fund (IMF).

The PIAF chairman said that business-friendly policies must be adopted as other neighbouring countries of the region are giving to trade and industry. He remarked that the people would accept the government claims on economic growth and prosperity only when their problems would be solved and the essential commodities and utilities would be available at fair prices.