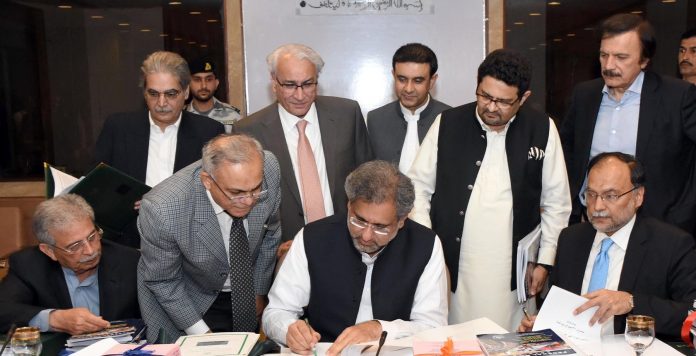 ISLAMABAD: Despite strong objection by opposition parties in the National Assembly (NA), the federal government on Friday presented the record 6th budget for the financial year 2018-19, with a total outlay of Rs5.9 trillion – a 16.2 per cent increase as compared to the previous budget.

In line with the expectations, the Pakistan Muslim League-Nawaz (PML-N) government gave a populist budget, announcing various subsidies, incentives and tax relaxations despite the current economic imbalances and missed targets.

Defending the right of the incumbent government to present the sixth budget, newly appointed Federal Minister for Finance Miftah Ismail said that presentation of the budget for the financial year 2018-19 was a solemn obligation of the present government.

“It is incumbent on this parliament, before its term expires, to debate and pass annual budget for next year,” he said, adding that it is essential for provinces to estimate federal fiscal transfers without which provincial government can neither formulate their budgets nor carry out their businesses. The next elected government will be free to make changes in the budget priorities, he added.

The finance minister said that after the transfer to provincial governments, the net revenue of the federal government was estimated at Rs3, 070 billion for 2018-19 as compared to revised estimates of Rs2, 676 billion for the current financial year.

He explained that total federal expenditure for the upcoming fiscal year was budgeted at Rs5, 246 billion as compared to the revised estimates of Rs4, 857 billion last year, registering an increase of 8 per cent. Interest payments for 2018-19 have been budgeted at Rs1, 620 billion against the revised budget of Rs1, 526 billion for 2017-18, he added.

Miftah informed the House that the defence budget is proposed at Rs1, 100 billion against the revised budget of Rs999 billion last year.

Talking about the whooping current account deficits, the minister said that an increase in productive imports had led to a widening of current account deficit to $12 billion in the first nine months of the current fiscal year. “The government has made adequate efforts to finance this deficit and I am certain that the foreign exchange reserves will be higher than their current level as a foreign direct investment (FDI) increased to $2.7 billion in FY2017 from $1.3 billion in 2013,” he added.

Talking about targets of the next budget, Miftah said that the target of real GDP growth rate will be 6.2 per cent, while inflation has been targeted to remain below 6 per cent. “Target of tax to GDP ratio is set at 13.8 per cent, budget deficit at 4.9 per cent of GDP and net public debt has been aimed to be at 63.2 per cent of the GDP,” the foreign minister added.

“Foreign exchange reserves would be targeted at $15 billion,” the minister informed the House, adding that the social protection programmes will continue.

Miftah said that to continue reduction of fiscal deficit and maintain a cautious monetary stance, FBR’s tax revenue target has been proposed to be fixed at Rs4, 435 billion, which is to be achieved through tax administration and compliance and not through any new tax measures.

The tax base will be enhanced while tax rates are being lowered, he said, adding that the government will continue investments in social protection, particularly Benazir Income Support Programme (BISP), through a targeted subsidy regime. For BISP an amount of Rs125 billion is being proposed in the budget, while Rs179 billion have been earmarked as subsidies, he added.

Talking about the special measures proposed for the next year, the de facto finance minister said that the incentives announced for the agriculture sector will continue in the next financial year. “The federal government will leave the business of subsidies to provincial governments and will focus on building a conducive policy environment for research and development,” Miftah added.

A number of incentives were announced in Budget 2017-18 including in agriculture credits, exemption of customs duty on harvesters, removal of GST on imported sunflower and canola seeds etc. All these incentives will continue to be available during 2018-19.

Uniform rate of GST on all fertilizers:

Considering fertilizer as the critical farm input the government reduced the sales tax on fertilizer from a high of 17 per cent to 4 per cent on DAP, 5 per cent on urea and 9-11 per cent on others.  “I am happy to announce that from July 1, there will be a reduced uniform GST rate of 2 per cent on all fertilizers. This will eliminate distortions in tax regime, further reduce fertilizer prices and promote use of balanced nutrients. It is also proposed to reduce GST on agriculture machinery from the current 7 per cent to 5 per cent and further concessions in taxes and duties are being proposed for the dairy and livestock sector,” Miftah said.

He added that the government increased target of agriculture credit from Rs315 billion in 2013 to Rs1, 001 billion in 2018. For the next year, this target is being increased to Rs1, 100 billion.

Keeping in view increase the cost of agriculture inputs and the corresponding demand for credit, government announced to increase the value of PIU to Rs6,000, which was Rs2,000 in 2013 and had been increased to Rs5,000 during the outgoing year.

The minister said that during 2018-19, this scheme of tariff subsidy on tube wells will continue in the areas where the provincial governments agree to share the cost of subsidy on a 50:50 basis.

Talking about measures taken in textile sector reductions in markup rates of LTFF and ERF to historic lows of 5 per cent and 3 per cent respectively, Miftah said that duty free import of textile machinery, uninterrupted supply of gas and electricity for industries, zero-rating of five key export sectors and introduction of export package of Rs180 billion will continue.

Five export sectors namely textiles, leather, sports goods, surgical goods and carpets shall continue to remain in zero-rated sales tax regime, the minister announced, adding that the government has decided to provide freight support on the export of potatoes.

“Export promotion schemes and incentives under Textile Policy 2014-19 shall remain available during FY 2018-19,” he said and added that an amount of Rs10 billion was being allocated for various schemes under these policies.

To support the exports, Miftah said that the government is moving towards zero rating of import materials for the export sector which will significantly reduce the creation of new refund claims.

“The refund claims currently pending will be cleared in a phased manner over the next 12 months starting July 1. After that, all new refund claims will be paid as per the time stipulated in law and regulations on monthly basis and there will be no delay. The government is working on a new package which will focus to increase non-traditional and value-added exports,” he added.

He said that for film and drama industry, the government is announcing a fiscal package under which reduction in customs duty to 3 per cent on the import of film and drama production equipment and sales tax to 5 per cent is being proposed.

For the development of Karachi, the government announced Rs25 billion development packages besides announcing a new scheme of seawater desalination plant. “This plant will be built by the private sector and will produce 50 million gallons of water a day.”

A special package called the 100-100-100 programme focusing on children’s development was announced by Miftah under which the government is targeting to achieve 100 per cent admission, attendance and graduation of children in schools. The government will pay for the transportation of female students to school, he added.

“This is a promise made by the parliament to the people of Pakistan. We have failed for the past 70 years but it will not happen anymore, even though education is a provincial subject,” the minister asserted.

In budget 2018-19, an allocation of Rs310 billion has been proposed for various projects of roads and highways.

The finance minister said that for enhancing human development, PSDP allocations for Higher Education Commission were being increased to Rs57 billion, for primary health programmes to Rs37 billion and for programmes for youth by Rs10 billion. In addition, the federal government is proposing to build 100 sports stadiums all over the country on cost-sharing basis with the provincial governments.

In view of increasing cases of Hepatitis, a National Hepatitis Strategic Framework has been developed together with the provinces. “Prices of hepatitis drugs have been brought to the lowest level and its production in the country is encouraged,” Miftah said.

Another special package amounting to Rs10 billion ─ along with a supplementary grant ─ was announced for health of the children. “40 per cent of the children experience stunted growth,” the finance minister said, adding that it will not be tolerated anymore.

For Azad Jammu and Kashmir (AJK) and Gilgit-Baltistan (GB), an amount of Rs44.7 billion has been proposed by the government in the new budget.

“For the people of AJK, we announce today a special project of Lipa Tunnel which will facilitate the local population. For FATA, Rs24.5 billion have been proposed and to bring it in the mainstream, a ten-year FATA Development Plan with a total outlay of Rs100 billion has been approved. During 2018-19, Rs10 billion are proposed to be provided,” Miftah informed.

The govt announced Rs90 billion to strengthen peace and security.

Talking about salaries and pensions, Miftah announced that a 10 per cent ad-hoc relief allowance will be provided to civil and armed forces employees with effect from July 1, 2018. A 10 per cent increase across-the-board is also being proposed for pensioners, he added.

Considering the difficulties of low-paid pensioners, the minimum pension is being increased to Rs10, 000 from the current Rs6, 000 and similarly, family pension will also be increased to Rs7, 500 from Rs4, 500 previously, he said.

“The minimum pension of pensioners above the age of 75 will be Rs15,000,” he announced.

The total tax revenue target is Rs4, 888.6 billion, of which the FBR taxes comprise Rs4,435 billion. With the tax rates reduced for all tax brackets, the government expects the tax net will see a considerable increase as it estimates the revenues from direct taxes to increase next year, Miftah said.

It also expects indirect taxes to increase by about Rs280 billion, he added.

As expected, the budget hikes current expenditures and cuts development, being the first PML-N budget to do so.

The Prime Minister’s National Health Programme, under which 3 million families across Pakistan are already receiving coverage, will be extended to all districts in the country and will help achieve the Sustainable Development Goals, Miftah announced.

“A survey will be held every two to three years to provide better statistics,” he added.

“The government wants to introduce renewable energy in all sectors,” Miftah said, adding that it is proposed that the 16 per cent duty on charging stations for electric cars will be ended.

The customs duty on the import of electric cars is proposed to be reduced from 50 per cent to 25 per cent in addition to exemption from regulatory duty of 15 per cent, he said.

Additionally, the government has proposed the federal excise duty on locally produced cigarettes “to be enhanced in respect of Tier-1, Tier-2 and Tier-3 to Rs3, 964, Rs1, 770 and Rs848 per thousand cigarettes respectively,” according to the budget statement.

In the aftermath of the 7th NFC Award, the provinces have been issued an extra Rs2, 500 billion in eight years, with a reduction in share of the federal government, the finance minister said.