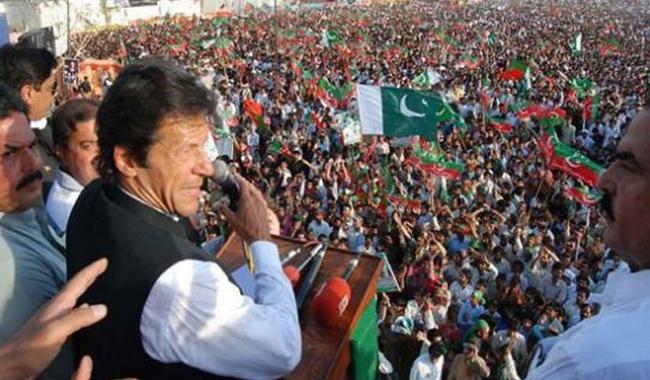 LAHORE: As the dust settles on the elections and the likelihood of the Pakistan Tehreek-e-Insaf (PTI) forming the government with a thumping majority, the questions arise whether it is ready to deal with the cliffhanger of an economy saddled by trade, current account deficits and depleting foreign exchange reserves.

The economic mismanagement of the previous government, rising external and domestic debt, the balance of payments problem challenges will create a lot of headaches for PTI.

On the economic front, PTI’s likely nominee as Finance Minister is expected to be Asad Umar who will have his back against the wall, as immediate issues like seeking an IMF bailout, reining in deteriorating foreign exchange reserves, current account and trade deficits would have primary importance.

From December 2017 till the middle of July this year, the rupee has been devalued in four rounds by the State Bank of Pakistan by around 21 percent to stimulate exports, which grew by around 14 percent to $23.228 billion in recently concluded FY18.

And foreign exchange reserves plunged to a four-year low and as of July 13th, central bank reserves were recorded at $9,063.6 million.

However, correspondingly imports skyrocketed to a record high of $60.898 billion, growing 15.10 percent and contributing to the trade deficit reaching $37.670 billion in FY18.

Although, the economy grew at 5.8 percent during FY18, the highest in a decade but Fitch in its advisory earlier this month warned that after general elections, the next government would have limited time address its debt problems which are bound to accelerate in 2019, hence, requiring concentrated policy efforts and swift implementation starting this fiscal year.

Also, Pakistan’s borrowing hit record highs during FY18 to $11.4 billion including a cash addition of $500 million by China’s State Administration of Foreign Exchange (SAFE), according to data shared by Ministry of Finance and Economic affairs with Express Tribune.

Profit reached out to Adnan Sheikh Pak Kuwait Investment Co AVP Research to know what challenges PTI government is likely to face when it comes to power.

Mr Adnan said “The previous govt’s window dressing has left the real economy in shambles while the informal economy has flourished due to lack of checks and balances. Shifting resources from informal to formal channels will be a painful process and many toes will be stepped on.

He added, “On the economy front, besides the moonshot of some significant angel financing from friendly countries, we likely have no choice but to go to the IMF and one can expect them to turn the screws tight this time given the lax compliance from the previous bailout.”

While speaking about the currency situation and rupee depreciation, “On the dollar front we can expect 150 in the near term and even 200 over the medium term, in order to curb imports and consumption. Import duties need to be enhanced, smuggling needs to be curtailed, domestic production is the need of the hour,” said Adnan.

While commenting about foreign direct investment (FDI), “It can be expected when a stable policy is in place, but for that, a lot of systematic clean up needs to be done first,” said Adnan.

Head of Research, Arif Habib Limited Samiullah Tariq while speaking to Profit about PTI and its expected economic policies said “We see a concerted emphasis on turning around fortunes of the ailing state-owned enterprises (SOEs) of the country. To achieve this Himalayan task, PTI propagates the idea of devolution of power.

The party is expected to alienate the SOEs from the influence of ministries, whilst ensuring effective, honest and capable leadership alongside non-political and autonomous boards.”

For that, PTI aims to improve it by digitization of processes/land records, court orders, decreasing frequency of tax payments, compressing timelines for the provision of basic amenities measures to reduce red-tapism, bureaucratic hurdles (online filing of documents) and improvement of logistics infrastructure.

While talking about lagging exports & ballooning current account deficit, Mr Tariq told Profit, “The party will aim to introduce 100% zero rating of export-oriented and allied industries, clearing of tax refunds, conversion of refund pay orders to negotiable instruments which could be discounted via banks to create liquidity for the exporters and introduction of cascading tariffs to manufacture maximum products in Pakistan.”

When asked about CPEC and what PTI’s strategy would be towards it, Mr Tariq responded “PTI government will aim to facilitate integration of Pakistani manufacturers in global value chains, utilize expertise from China to aid the domestic manufacturers in Pakistan, and create more opportunities for promotion of local value-addition by the introduction of various incentives for value-added exports.”

Interestingly, when PTI comes into power, it will be severely restricted on the policy and financial front, an immediate visit to the IMF for a bailout cannot be ruled out and the global trend of rising interest rates and increasing oil prices either wouldn’t ameliorate its cause.