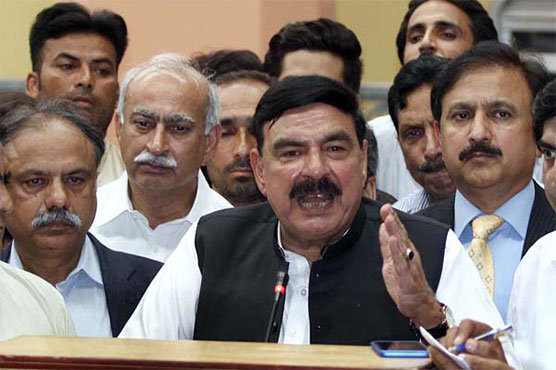 LAHORE: Railways Minister Sheikh Rasheed Ahmad on Monday said 10 new passenger trains would be run in 100 days, besides putting 12 more trains on the freight side.

The people would get a big news about the launching of a new freight train during the current month, he said while talking to media.

He said the Pakistan Railways (PR) was making efforts to increase the number of passengers from 50 million to 70 million and freight trains from eight to 12. Prime Minister Imran Khan would chair a committee meeting to take important decisions regarding the railways, he added.

About derailment of Khushhal Khan Express, he said AME Peshawar and Deputy CME (Carriage and Wagon) had been suspended, and warned that the divisional superintendents (DS) of strict action in case the tracks are not properly maintained. “We have decided that the DS should be responsible for the tracks’ maintenance,” he said, adding that the officers showing negligence in their duties would be taken to task.

The minister vowed that the Pakistan Railways would recover its dues worth billions of rupees from the public and private persons/entities at the earliest.

The department, he said, was going to sign a contract with Saeed Soigal and Mr Yahya for transportation of another 50,000 tons of coal. This contract, which would be valid till 2021, would generate Rs 1.2 billion revenue per annum, he confirmed.

Rasheed said the Pakistan Railways owned 15 oil depots to fuel its engines with an annual expenditure of Rs 14 billion, which would be enhanced to Rs 18 billion. “The current management, however, had decided to carry out an immediate audit of all the oil depots and the Pakistan Railways would hopefully be able to save Rs 1 to 2 billion. Things would be cleared after the audit report and any officer or official found involved in corruption would be dismissed from the service,” he added.

The minister said a process was underway to install defoggers and other related equipment on the trains within the next two months, so as to carry more passengers and ensure smooth flow of railway traffic during foggy weather. “We have a great support from overseas Pakistanis in this regard,” he added.

He said the PR wanted to outsource the marketing and in this regard had invited the private sector for the branding of railway stations, adding that the department had also decided to make Tezgam Express up to the mark keeping in view its name of ‘Tezgam, in order to meet the passengers’ expectations.