‘Govt committed to making Pakistan a conducive market for investments’ 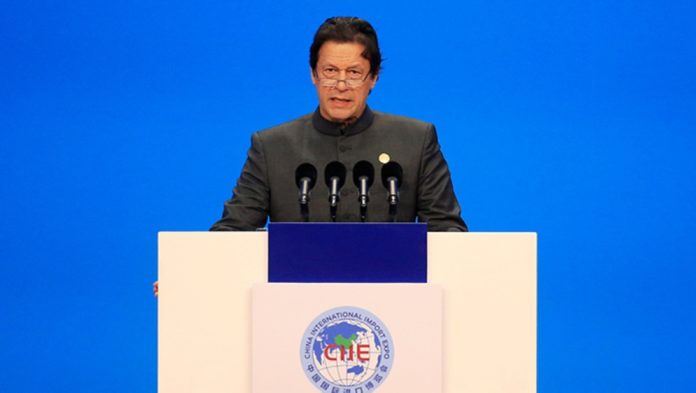 SHANGHAI: Prime Minister Imran Khan on Monday said that the government remained committed to improving transparency and accountability processes in the country and making it more conducive for business and investment.

The PM expressed these views while addressing the opening ceremony of International Import Expo in Shanghai as the keynote speaker, on the fifth day of his first official visit to China since assuming charge as the country’s premier.

The prime minister said his government had initiated meaningful reforms impacting all sectors and every aspect of governance and was committed to improving transparency and accountability by introducing smart technology solutions.

Thanking China for its hospitality, PM Imran said Pakistan found great comfort in President Xi Jinping’s statement that their doors would never be shut but would only open wider.

On the China-Pakistan Economic Corridor (CPEC), he said the corridor would serve as a vital link for the two countries to the Middle East and Central Asian Republics, adding that being part of the Belt and Road Initiative, it would safeguard their common objectives.

The prime minister on the occasion shared his party’s slogan of change which he had introduced during his campaign to woo the voters in Pakistan before July 25 polls. Khan said his government is fully committed to implementing the manifesto to bring about positive changes in the country.

The PM also highlighted the immense potential of Pakistan’s export industries. “We in Pakistan are blessed with an abundant array of resources ranging from minerals to fertile land to the wealth of renewable energy and the most diverse landscape with twelve climatic zones. Our industries are already producing high-end textiles, sports goods, engineering goods, IT services and medical technologies, including surgical instruments,” he said. “But by far, our greatest and most promising asset is our human resource. We have 100 million Pakistanis below the age of 35 which makes us a young and vibrant population.”

On the BRI, Khan said that it gives shape to the global community of shared interests. “The Shanghai Import Expo will help spread dividends of free market amongst more closely-integrated economies. In Pakistan, Karakoram Highway merging into a network of modern highways, under CPEC, is a mechanism to forge even closer connectivity between the Middle East and China and between Central Asia and South Asia. It is opening fresh investment avenues, new markets and new vistas for investors,” the PM mentioned.

He said the government has initiated reforms impacting all sector and every aspect of governance, adding that his government is also committed to improving the framework of transparency and accountability.

“At a time when international trade system is under attack and unilateralism and protectionism is on the rise, we take the great compliment in the President Xi’s courageous statement about opening and future reforms,” he concluded.

PM Imran is among 17 heads of state and government who are attending the expo. More than 2,800 companies from 130 countries and regions and 160,000 buyers from over 80,000 Chinese and foreign companies are participating.

Exhibitors from around 140 countries and regions will be on hand, including 404 from Japan, the most of any country. From the United States, some 136 exhibitors will attend, including Google, Dell Inc, Ford and General Electric.

President Xi Jinping said on Monday at the opening of the week-long trade expo that China will lower import tariffs and continue to broaden market access.

He also promised to accelerate the opening of the education, telecommunications and cultural sectors, while protecting foreign companies’ interests and enhancing punitive enforcement for infractions of intellectual property rights.