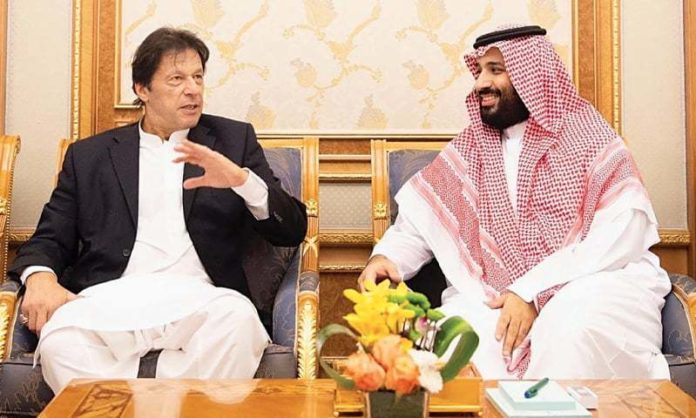 ISLAMABAD: Saudi Crown Prince Muhammad bin Salman is scheduled to land in Islamabad on Sunday for an overnight stay, it was learnt on Tuesday.

As per the sources, the crown prince would be staying in the Prime Minister’s House while other members of his huge entourage would be lodged in local hotels and the Punjab House.

Sources at the Saudi Embassy in Islamabad said during the visit of the Saudi prince, “Pakistan and Saudi Arabia will ink agreements worth $20 billion”.

“The crown prince is expected to visit in the afternoon and will return the next afternoon,” the sources said, adding that five trucks full of Prince Mohammed bin Salman’s personal amenities have already reached Islamabad.

The prince’s exercise equipment, furniture and other personal belongings have also reached Islamabad, while 80 containers will be shipped to Islamabad for the Royal entourage’s stay, sources said. “The vehicles to be used by the crown prince will reach here a day before his landing.”

They said the renovation of the official residence of the prime minister that started last week would be completed later this week for the Royal guest, adding that the crown prince would be “the first state guest to stay at a government building reserved for the prime minister of Pakistan”.

“Prime Minister Imran Khan will receive the guest at the airport. Army officials would be deployed at important points during the stay of Crown Prince Salman. The crown prince’s delegation will comprise about 1,100 officials and businessmen. He will be the guest of honour at the international investment conference scheduled to be held next week in the federal capital,” the sources said.

Negotiations will be held to attract Saudi investment in Bahawalpur solar plants as well as and in the power plants of Haveli Bahadur Shah and Bhikki, they said, adding that during the crown prince’s visit, both sides would sign four memorandums of understanding (MoUs) worth $15 billion.

“The government plans to provide 20-year tax holiday on the establishment of an oil refinery at Gwadar. A private businessmen delegation of over 40 CEOs of Aramco and other oil giants would be accompanying the crown prince in his upcoming visit,” the sources claimed.