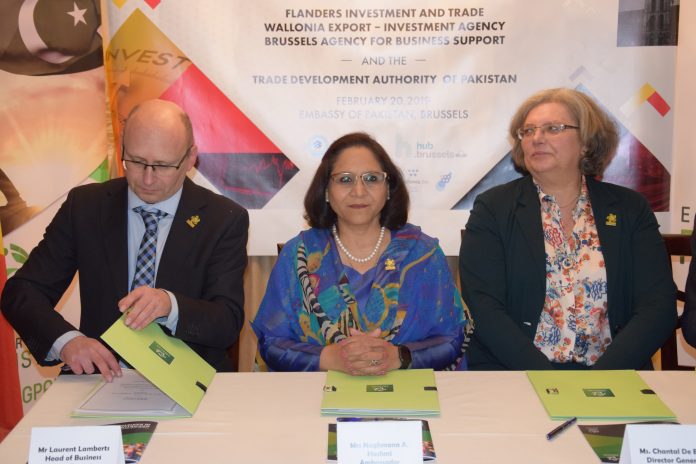 ISLAMABAD: A historic memorandum of understanding (MoU) with regard to cooperation in business and investment has been signed by the Trade Development Authority of Pakistan (TDAP) jointly with trade and investment bodies of three regions of Belgium, namely the Flanders Investment and Trade, Wallonia Export Investment Agency and Brussels Agency for Business Support.

This is for the first time that all the three regions of Belgium have jointly signed an MoU with any other country. On behalf of TDAP, Pakistan’s Ambassador to Belgium, the European Union and Luxembourg Naghmana Alamgir Hashmi signed the MoU, whereas Dirk Van Streeteghem, Chantal De Bleu and Laurent Lamberts signed the documents on behalf of the three Belgian agencies, respectively.

Speaking on the occasion, Ambassador Hashmi noted that trade between Pakistan and Belgium is constantly increasing and for the last year, there has been an increase of 49pc in the bilateral trade.

She said that Pakistan’s economy has taken an upward trajectory and the country is fast emerging as a suitable destination for trade and investment. “The MoU was long awaited and will provide a foundation and framework for enhancing economic and trade ties between the two countries,” she added.

The envoy said that the present government’s priority is to create a conducive environment for businesses in Pakistan and a liberal visa regime would soon be introduced to facilitate business visits to the country.

Flanders Investment and Trade Director Dirk Van Streeteghem on the occasion said that there has been a significant rise in the trade relations between the countries which was evident from the ever-increasing exchange of trade missions.

Wallonia Export Investment Agency Director General Chantal De Bleu, who visited Pakistan in November 2018, said the trade mission last year was a big success, adding that the MoU could help in taking up diversified actions, like cross-market networking, for the mutual benefit of the two countries.

Brussels Agency for Business Support Exports Unit Head Laurent Lamberts said Pakistan is a growing economy and his agency would be interested in helping Pakistani businesses for trade and investment in the Brussels region.