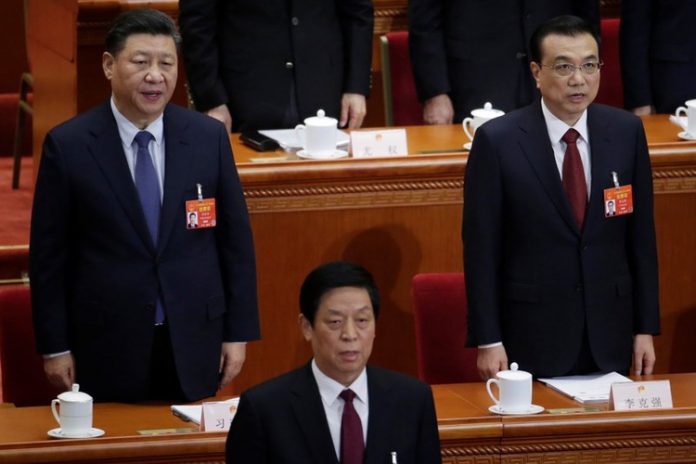 BEIJING: China sought to shore up its slowing economy through billions of dollars in planned tax cuts and infrastructure spending, with economic growth at its weakest in almost 30 years due to softer domestic demand and a trade war with the United States.

The government is targeting economic growth of 6.0 to 6.5pc in 2019, Premier Li Keqiang said at Tuesday’s opening of the annual meeting of China’s parliament, less than the 6.6pc gross domestic product growth reported last year.

Sources said earlier this year that China would cut its 2019 growth target to 6.0 to 6.5pc from the 2018 target of around 6.5pc as both global and domestic demand ebbed and the US trade war heightened economic risks.

Speaking in Beijing’s Great Hall of the People, Li warned of the challenges the world’s second-largest economy faced and pledged to keep it on a safe footing with an array of stimulus measures.

“The environment facing China’s development this year is more complicated and more severe,” he said. “There will be more risks and challenges that are either predictable or unpredictable and we must be fully prepared for a tough battle.”

Those tax cuts are more aggressive than the 1.3 trillion yuan delivered in 2018 and include reductions aimed at supporting the manufacturing, transport and construction sectors.

China’s GDP last year expanded at its slowest pace since 1990 due to the trade war and Beijing’s crackdown on financial risks, which raised corporate borrowing costs and hurt investment.

Analysts say Beijing’s move to adopt a GDP target range, rather than a single growth figure, gives policymakers room to maneuver. But the increase in planned fiscal stimulus marks an explicit acknowledgement that authorities remain concerned about growth.

“If you are not sick you will not take so many medicines at one time,” said Iris Pang, Greater China Economist at ING Wholesale Banking. “It means the headwinds have not gone away, they are still there.”

China has ramped up the propaganda in the run-up to parliament, with state media releasing English-language videos and even a rap song praising the event as an exercise in Chinese democracy, though the legislature never rejects laws and its members are chosen for their loyalty to the Communist Party.

The annual gathering in the capital includes more than 3,000 delegates, who come from all over China, with ethnic minorities showing up in colorful traditional outfits.

To support growth, Li said China would closely monitor employment at exporting companies heavily exposed to the US market and cut the value-added tax (VAT) for the manufacturing sector to 13pc from 16pc. VAT for the transport and construction sectors will be cut to 9pc from 10pc.

China aims to create more than 11 million new urban jobs this year and keep the urban unemployment rate within 4.5 percent, in line with its 2018 goals. At the same time, it will cut the social security fees paid by companies.

The lower tax revenue and higher government spending push China’s budget deficit target for this year up to 2.8pc of GDP from last year’s 2.6pc.

The government has also set a consumer inflation target of around 3 percent despite a recent softening in price rises to less than 2 percent, which gives Beijing some room to stimulate consumption.

Over the past year, China’s central bank has cut the reserve requirements for commercial lenders five times to spur loans to small and private companies – vital for growth and jobs.

Li said on Tuesday monetary policy would be “neither too tight nor too loose” and that the government would not resort to a flood of liquidity. Growth targets for M2 money supply, which includes cash in circulation and deposits, and total social financing this year would be in line with nominal GDP growth.

To support private and smaller firms, Li said Beijing will step up targeted cuts in the reserve requirement ratio for smaller and medium-sized banks with an aim to boost lending to small companies by large banks by more than 30pc.

Addressing one of the biggest challenges China’s economy faces, the government’s work report to parliament said it would continue to promote Sino-US trade negotiations and was committed to safeguarding economic globalization and free trade.

Li’s work report also said China will further improve market access for foreign investment and create an environment in which Chinese and foreign firms are “treated as equals and engage in fair competition.”

Separately, China’s top banking regulator said on Tuesday Beijing could “absolutely” reach an agreement with the United States on opening up its financial sector, even as the country’s commerce minister admitted talks with Washington had been difficult.

In recent weeks, the United States and China appear to have moved closer to a trade deal that would roll back US tariffs on at least $200 billion worth of Chinese goods.

US Secretary of State Mike Pompeo said on Monday he thought both nations were “on the cusp” of a deal to end their trade war.