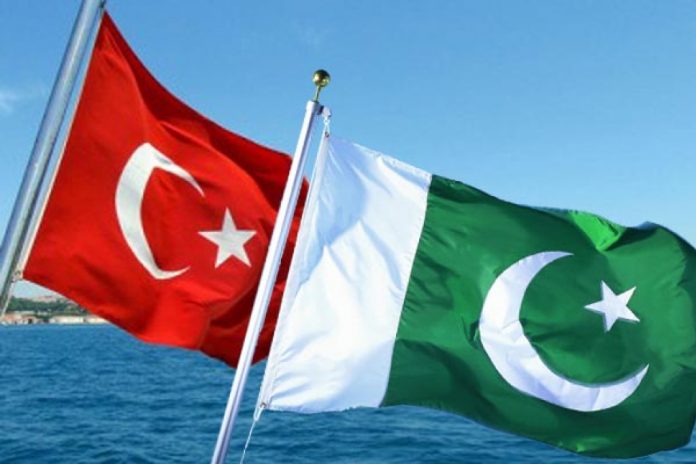 ISLAMABAD: The Turkish government has presented its proposals on the Strategic Economic Framework (SEF) to Pakistan, according to a statement issued by the Ministry of Finance on Thursday.

The decision with regard to the formulation of SEF was taken during the visit of Prime Minister Imran Khan to Turkey in January this year.

Following the successful visit of Prime Minister Imran Khan to Turkey in January, major developments were taking place in operationalising the SEF between Pakistan and Turkey.

The purpose of the framework was to enhance the volume of bilateral trade five times from the current level of $900 million.

Towards this goal, the two governments were negotiating a Free Trade Agreement, which is expected to be signed this year.

Under the framework, trade facilitation would be enhanced by improving the connectivity through rail, air, road and sea. Cooperation between Pakistan Railways and Turkish Railway Car Company (TUDEMSAS) and Turkish Locomotive and Engine Company (TULOMSAS) for rail production, maintenance, repair and operation was also envisioned.

Turkey expressed a particular interest in developing the legal framework for tourism, including infrastructure planning, allocation of public properties to the investors, and determination and classification of hospitality facilities based on international standards.

Turkey also intends to provide technical support for tourism promotion and marketing. Seminars will be organised reciprocally in this regard.

Pakistan has recommended signing a memorandum of understanding on cooperation in the field of investment, focusing on auto industry, special economic zones, food processing, mining and minerals, besides construction sector and tourism.

Pakistan looks up to Turkish cooperation in the development of tourist resorts. Similarly, both sides have expressed interest in strengthening cooperation in the field of educational services, inter-university exchange programmes and establishment of research centers.

The Pak-Turkey SEF will serve as the overarching strategic policy framework for investment and trade relations. A high-level Strategic Cooperation Council will provide overall guidance and vision regarding the SEF.

There shall be a strategic economic group, co-chaired by the Turkish vice president and the finance minister of Pakistan. There shall be seven joint working groups which would provide sector-specific inputs for the framework.