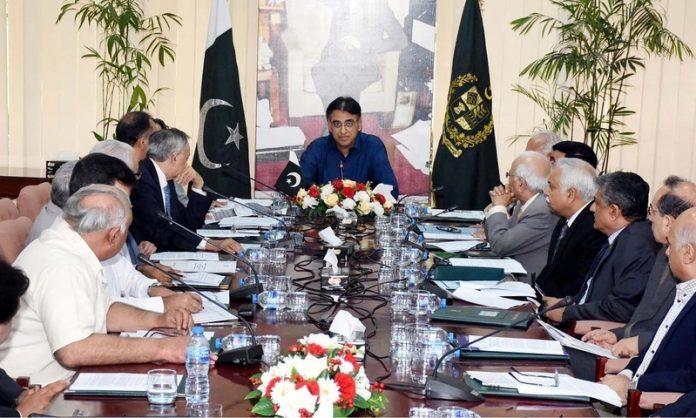 ISLAMABAD: Keeping in mind the increasing demand for gas in the country, Finance Minister Asad Umar has directed the Maritime Affairs Division to expedite the process of establishing the new LNG terminal.

He gave these instructions while chairing the meeting of Economic Coordination Committee of the Cabinet (ECC) on Wednesday.

As per details, the Maritime Affairs Division briefed the ECC about the progress on new LNG Terminal.

The ministry stated the Port Qasim Authority (PQA) had identified Jharri Creek/ChanWaddo as potential LNG zone for the establishment of future LNG terminals. However, it added, as the scientific study could not be conducted on time, the ministry has asked PQA to conduct the said study within six months.

Meanwhile, on a summary of the Petroleum Division, the ECC approved gas supply to Tall and adjacent areas of district Hangu, Khyber Pakhtunkhwa.

The ECC also approved a proposal of Federal Board of Revenue (FBR), waving off the accumulated penal surcharges of Rs700 million against overstayed consignments at ports. The decision would help importers clear their overstayed cargoes and would also reduce congestion at ports and bonded warehouses.

Moreover, the Commerce Division gave a presentation on the significance of the establishment of an Independent Insurance Regulator. The ECC directed the Commerce Division to expedite the findings of the commission, already formed on the subject so that an informed decision could be taken in this regard.

On a proposal of the Petroleum Division regarding arrangements of additional 200 MMCFD of LNG from Qatar, the committee directed the Petroleum Division to carry out a comprehensive demand/supply analysis of LNG in the country, in consultation with stakeholders, including Law and Justice Division, and submit a summary to the cabinet.

On issues pertaining to the Pakistan Steel Mill’s revival plan, ECC directed the Ministry of Industries to submit its proposals within the next fortnight.

The committee also accorded approval to the proposal of the National Counter Terrorism Authority by granting it a technical supplementary grant of Rs133.156 million.

Later, the finance minister also presided over a meeting of the Cabinet Committee on Energy (CCoE) and reviewed various proposals about gas losses and power recovery plan presented by petroleum and power divisions separately.

The committee directed the Petroleum Division to take corrective measures to reduce gas losses. It asked the division to submit a monthly report on Unaccounted for Gas (UfG) on the pattern of the report on electricity losses presented by the Power Division.

The committee also directed both gas supply companies (SNGPL & SSGPL) to prepare a joint presentation, and present the same to Task Force on Energy before submission to CCoE in its next meeting.

In order to ensure recovery from the defaulters, CCoE directed Power Division to implement the Electricity Act in letter and spirit by disconnecting the connections of defaulters.

The committee was briefed by the Power Division about the status on Efficiency Tests Report for Independent Power Producers (IPPs). It was informed that the mandatory test had been carried out for all the seven units. The data analysis had been completed for five units while the same with regard to the remaining two units was presently underway.