Sugar rush fades for Indian farmers ahead of vote 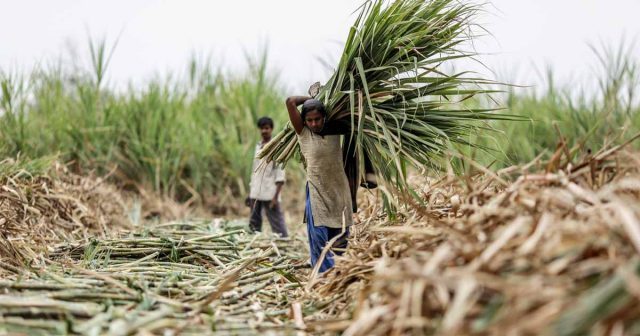 PAINGA: India is vying to become the world’s top sugar producer, but for its millions of sugarcane growers life is far from sweet as the country prepares for its mega-election from next week.

Their woes are part of a deep crisis in rural India, with debts and drought driving thousands of farmers to suicide in recent years, putting Prime Minister Narendra Modi on the back foot as he runs for a second term.

“We have not got a single penny for four months of crop that we have sold,” said Ved Pal, gazing worriedly at stacks of sugarcane piled up on his farm in Uttar Pradesh state in northern India.

“Last year’s payments are still due. I have lost interest in farming but there is nothing else to do,” he told AFP in the village of Painga.

Sugarcane used to be an attractive option for growers, traditionally offering much higher returns than other crops. The plant is also hardy, but thirsty — further depleting groundwater reserves in many areas.

“This crop can sustain heavy rain, hailstorm and even if it catches fire we can still recover some crop. And we have (a) captive market available as well,” Pal said.

One of Modi’s economic successes over the past five years is taming inflation, the pernicious increase in prices that has long bedevilled India’s economy.

In the case of sugar, this has been achieved by keeping a lid on the price at which sugar mills — which process sugarcane into the white stuff — can sell their produce.

But this set price — despite an increase in February — is so low that many mills are losing money. The amount they can afford to pay growers is paltry, if they can pay at all, leaving farmers high and dry.

As of last month, some $3 billion was owed to sugarcane growers, according to government data.

“The government needs to set a higher minimum price for sugar — adequate to cover the cost of cane,” Abhinash Verma of the Indian Sugar Mill Association said.

Uttar Pradesh and Maharashtra are the main sugar producers, growing 75pc of India’s output, and the states’ 25 million sugarcane farmers are an important vote bank.

Uttar Pradesh, home to 200 million people, is part of the northern Indian Hindi heartland that was key to bringing Modi to power in 2014 with his promise of “Acche din” (“Good days”).

“We got this government to power on hopes that they will bring us good days, and double farm income,” said Anil Kumar, another sugarcane farmer in Uttar Pradesh.

“We can accept income not doubling but at least let us have what we were earning,” he said.

But it’s not just these two states, and it’s not only sugar farmers who are suffering.

Some 70pc of its rural households depend primarily on agriculture for their livelihood, according to the UN, and life for many is tough due to drought, extreme weather and dysfunctional markets.

Their plight has sparked angry demonstrations in the run-up to the election, including last October when farmers clashed with police on the outskirts of New Delhi.

The last budget of Modi’s outgoing government provided some sops for farmers but this hasn’t stopped the opposition jumping on the issue — and on record Indian unemployment — in the campaign.

On Tuesday the main opposition Congress party released its manifesto promising to waive all farmer loans and ensure “remunerative prices”, saying it has “heard the cry of anguish of farmers and feels the pain of their acute distress”.

But this may come too late for Anil Kumar.

“I don’t have money to send my kids to a proper college,” he said. “They spend half the day helping me out at the farm. When will they study?”