LAHORE: Hascol Petroleum Limited Tuesday denied allegations of tax fraud after it was reported that the company was involved in tax evasion of Rs3.9 billion. 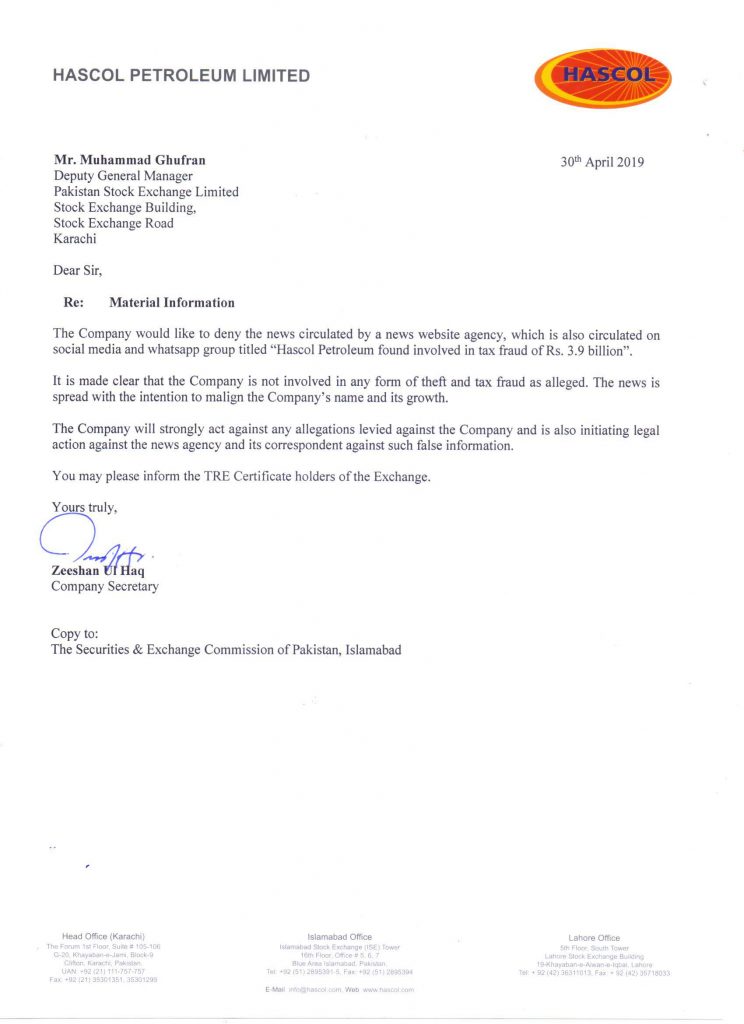 A day earlier, it was reported that Hascol Petroleum Limited, a company engaged in the purchase, storage and sale of petroleum products, was committing tax fraud to the tune of Rs3.9 billion. The company had allegedly concealed and evaded sales tax amounting to Rs3.6 billion and further tax amounting to Rs279 million.

Scrutiny of record/data available for the period from July 2016 to December 2018 in sales tax returns-cum-payment challans had revealed that M/s Hascol petroleum had declared self-sales by issuing flying invoices in the name of M/s Hascol Petroleum Limited to conceal further tax on supplies of lubricants and other related items.

The company had allegedly shown Rs13 billion in sales value and Rs2.5 billion sales tax, while there was Rs279 million further tax involved, documents stated. On the basis of the above mentioned facts, Hascol had short paid further tax amounting to Rs279 million.

If the purchases increased by 15 per cent, then sales should have increased by approximately 15 per cent as well. The trend shows that the registered person of the company was evading supplies by accumulating into carry forward of input tax which resulted in short payment of sales tax.

It was further reported that Section 21(2) of the Sales Tax Act, 1990 read rule 12(a)(i) of the Sales Tax Rules, 2006 clearly stipulates that the commissioner having jurisdiction, if satisfied that the registered person has issued fake invoices or has committed tax fraud, the registration of such person may be suspended by the commissioner through system without prior notice pending further inquiry.