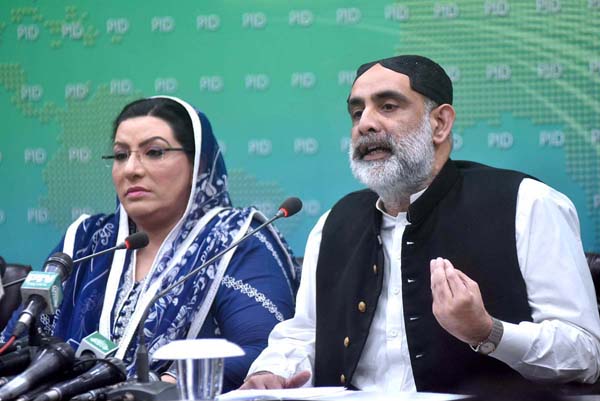 ISLAMABAD: The Pakistan Tehreek-e-Insaf (PTI) government has increased budget allocations for the agriculture sector by 1,200 per cent in order to revive the agriculture and livestock sectors.

This was revealed by National Food Security and Research Minister Sahibzada Mehboob Sultan during a press conference on Thursday. The minister was flanked by Prime Minister’s Special Assistant on Information and Broadcasting Dr Firdous Ashiq Awan and Kissan Ittehad Chairman Khalid Khokhar.

Minister Sahibzada Mehboob Sultan said for the first time in Pakistan’s history, Prime Minister Imran Khan has given priority to the agriculture sector by allocating Rs12.5 billion for it in the budget, which was just Rs1 billion.

He said the government would launch 13 projects at a cost of Rs296 billion to promote the agriculture and livestock sectors of the country.

Being a devolved subject, he said the federal government will chip in Rs93.5 billion, while the provinces are expected to contribute Rs50 billion to promote the agriculture sector.

The minister said water conservation is another feature of these projects, as watercourse lining, development of small dams and their command areas as well as the establishment of check dams and ponds to store water for irrigation purposes will be focused.

Sahibzada Mehboob Sultan said he will try to get electricity rates reversed for the agriculture sector at Rs5.35 per unit, which have been enhanced to Rs6.85 per unit in the budget.

Kissan Ittehad Chairman Khalid Khokhar said on the occasion that the government should abolish general sales tax on agriculture machinery, while Dr Firdous Ashiq Awan said the federal government and provinces will jointly share the additional burden of electricity bills of over Rs10,000 to facilitate the farmers’ community.

Commenting on political matters, she said the government is committed to holding those accountable who plundered the national wealth, adding that the government is finalising terms of reference regarding the inquiry commission announced by Prime Minister Imran Khan.

To a question, she said, “We are going to revamp state institutions like PTV, Radio Pakistan and APP, as the government is going to formulate a new advertising media policy after consulting relevant stakeholders.”