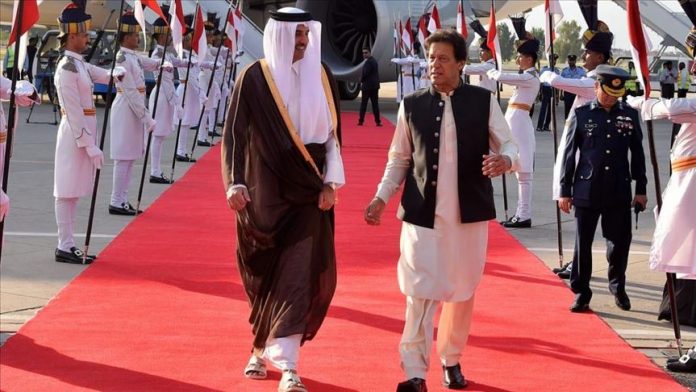 ISLAMABAD: Following the two-day official visit of Qatar Emir Sheikh Tamim bin Hamad Al Thani which wrapped up on Sunday, the oil-rich Gulf state has announced $3 billion worth of new investments in Pakistan, in the form of deposits and direct investments, Adviser to Prime Minister on Information Dr Firdous Ashiq Awan said on Monday.

In a tweet, Sheikh thanked the “Emir of Qatar HRH Sheikh Tamim Bin Hamad Al Thani for announcing [the] US $3 Billion in #deposits and direct #investments for #Pakistan and for #Qatar’s affirmation to further develop relations between the two countries”.

The Qatari investment came after Saudi Arabia and the United Arab Emirates pledging aid packages for the debt-burdened Pakistani economy. Riyadh has given a $3 billion loan, while the UAE provided $1 billion. Pakistan and the IMF reached an agreement in May on a loan of about $6 billion aimed at shoring up its fragile public finances and strengthening a slowing economy, Bloomberg reported.

The announcement came after a visit by Qatar’s emir to Pakistan. During the visit, Pakistan and Qatar signed several memoranda of understanding for trade and investment, tourism and business and for cooperation in financial intelligence, according to the Pakistani government’s Twitter account.

Pakistani Prime Minister Imran Khan’s government is seeking to stabilize its economy with loans from Gulf countries and international donors.

During the meeting, the two sides signed three memoranda of understanding (MoUs) on trade and investment and cooperation on financial intelligence and tourism.

The MoUs related to the establishment of the Pakistan and Qatar Joint Working Group on Trade and Investment, cooperation in the field of tourism and business events and cooperation in the exchange of financial intelligence related to money laundering — associated offences and terrorism financing. The last MoU was signed between Qatar’s Financial Information Unit and Pakistan’s Financial Monitoring Unit.

Both sides also agreed to take steps to significantly expand collaboration in the agriculture and food sectors; enhance cooperation in the energy sector including the LNG and LPG fields and exploration and production of oil and gas; promote Qatar’s investments in energy, tourism and hospitality industries; expand cooperation in the fields of aviation, maritime affairs, higher education, and defence and defence production.