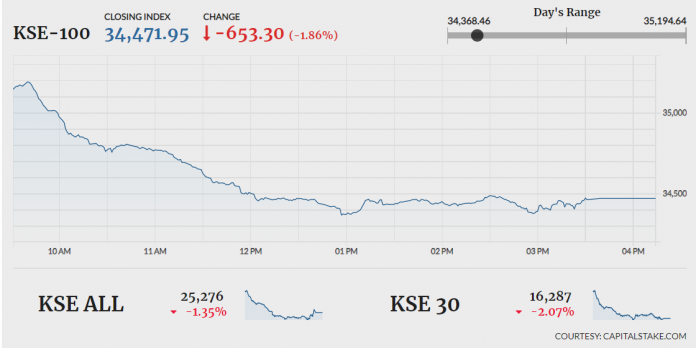 KARACHI: Stocks bled on the first trading session of the week, as the KSE-100 index benchmark nosedived over 700 points intraday amid low market turnover.

Foreign investors closed the previous week (from June 17 to June 20) as net sellers with a net outflow of $5.89 million.

On the economic front, Adviser to Prime Minister on Finance Dr Abdul Hafeez Shaikh tweeted on Monday that Pakistan has secured another bailout package of $3 billion from Qatar. Following the package, Pakistan’s total loans from friendly countries have reached $16 billion within one year’s time.

Moreover, as per news reports, the government has surpassed its annual target of foreign loans in 11 months, acquiring $9.5 billion from international creditors for repayment of previous loans and for failure in achieving the $27 billion export target. Gross foreign loan disbursements from July to May of the outgoing fiscal year were higher than the annual budgetary target of $9.3 billion

On the market front, the management of Engro Foods Limited (EFOODS +0.18pc), through a notification sent to the exchange, announced that the company has changed its name to FrieslandCampina Engro Pakistan Limited.