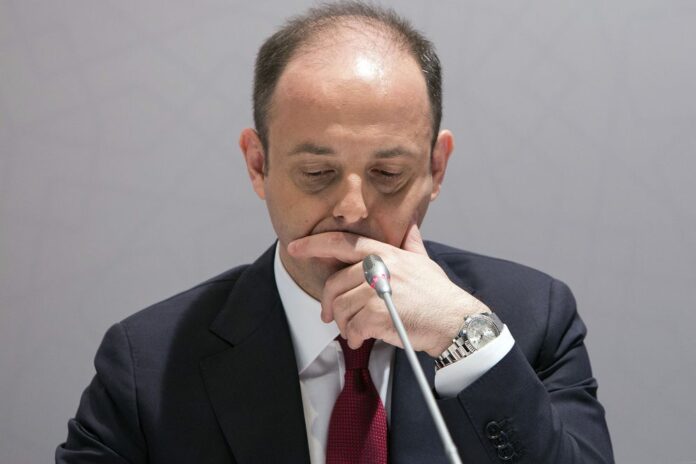 ANKARA: Turkish President Tayyip Erdogan sacked the governor of the central bank on Saturday as differences between them deepened over the timing of interest rate cuts to revive the recession-hit economy.

Governor Murat Cetinkaya, whose four-year term was due to run until 2020, will be replaced by his deputy Murat Uysal, a presidential decree published early on Saturday in the official gazette showed.

No official reason was given for the sacking, but government sources cited Erdogan’s frustration that the bank has kept its benchmark interest rate at 24pc since last September to support the ailing lira currency.

The Turkish economy shrank sharply for the second straight quarter in early 2019 as a punishing currency crisis, persistent double-digit inflation and high interest rates took a toll on overall output.

“President Erdogan was unhappy about the interest rate and he expressed his discontent at every chance. The bank’s decision in June to keep rates constant added to the problem with Cetinkaya,” a senior government official told Reuters, speaking on condition of anonymity.

“Erdogan remains determined to improve the economy, and for that he made the decision to remove Cetinkaya,” the official added.

However, Cetinkaya’s sacking comes just days before Turkey is expected to take delivery of Russian air defense systems, triggering likely US sanctions which could put the lira under renewed pressure.

Two other government sources told Reuters disagreement between the government and the governor over monetary policy has intensified in the past few months.

Cetinkaya hiked the benchmark interest rate by a total of 11.25 percentage points last year to support the lira, pushing it to the current 24pc.

Erdogan, whose son-in-law is the finance and treasury minister, repeatedly criticized the central bank for keeping rates high.

“The president and the finance minister demanded his resignation, but Cetinkaya reminded them of the bank’s independence and declined to resign,” one of the government sources said.

In a statement on Saturday, the central bank said it will continue to operate independently and that the new governor will make maintaining price stability the key goal.

“In his first remarks, Murat Uysal, said the communication channels would be used at the highest level in line with the price and financial stability goals,” the bank said, adding that Uysal would hold a news conference in the coming days.

Data earlier in the week showed Turkey’s consumer inflation slowed to its lowest level in a year in June, mainly due to a high base effect from the prior year and a drop in food prices, potentially paving the way for the country’s first interest rate cut since last year’s currency crisis.

Annual inflation hit a 15-year high in October above 25pc, but later dipped and is currently running just over 15.5pc.

The lira is down about 5pc this year after having plummeted 30pc last year during the currency crisis.

While the central bank emphasized its independence, a senior banker who did not want to be named due to the sensitivity of the issue, said the sacking raised questions regarding the bank’s authority.

“The removal of the governor from duty creates doubt regarding the job security of the head banker and the bank’s independence. We will be watching the bank closely in the coming period,” the Istanbul-based banker told Reuters.

The main opposition party also pointed to concerns that the move could undermine the bank’s credibility.

“Those who removed the central bank governor overnight have lost the right to demand confidence in the country’s economy. The central bank is a captive being kept in the palace,” said the main opposition party spokesman Faik Oztrak, referring to Erdogan’s office.

“The assumption is the new guy was hired because he will cut rates on demand from the presidential palace,” said Tim Ash, senior emerging markets strategist at BlueBay Asset Management.

“Ironically Uysal’s hiring likely makes it more difficult for the (central bank) to cut rates as the risk now is that the market reacts badly to this HR change at the central bank.”