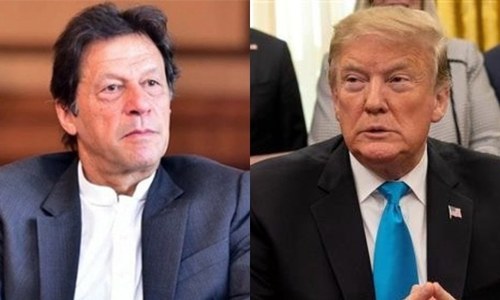 WASHINGTON: In a meeting at the Embassy of Pakistan in Washington DC, Prime Minister Imran Khan invited businessmen and investors to benefit from economic and business opportunities in Pakistan.

He is on a three-day official working visit to the US. The prime minister began his official engagements soon after his arrival in the US capital on Saturday. He will go to the White House on July 22 (Monday) for an extensive three-hour visit, which includes a one-on-one meeting with United States President Donald Trump, and two meetings and a working lunch with the president’s team.

PM Imran met with a Texas-based Pakistani businessman Tahir Javed, a member of the Democratic Party Javaid Anwar, and another Pakistani American businessman, as well as a group of prospective investors.

According to a post shared by the government’s official Twitter account, the premier invited the businessmen to “benefit from the economic and business opportunities afforded by Pakistan’s strategic location and the connectivity to the broader region”. Additionally, the investors appreciated the improved security situation in Pakistan and identified areas of interest for investment in key sectors such as energy and tourism sectors.

Hundreds of members of the community belonging to Washington metro area and other states came to the US capital and lined up along Massachusetts Avenue near Pakistan House, where the prime minister is staying during the visit. Saadat Rana, a Woodbridge-based businessman, said the community is waiting anxiously to hear Imran Khan address them at the Capital One Arena. The gathered supporters chanted slogans of ‘Pakistan Zindabad’.

A rally of over 100 cars followed the prime minister from Dulles Airport to Washington DC to greet the leader. Earlier, Foreign Minister Shah Mahmood Qureshi, while discussing the prime minister’s schedule, said that PM Imran will meet IMF chief David Lipton and his delegation and will later have a similar meeting with the World Bank president. He will also attend a community event at Washington’s Capital One Arena.

His other engagements include a meeting of Pakistani-Americans investors, media interviews, addressing the US-Pakistani Business Council and a dinner meeting with selected leaders of America’s corporate sector. On Monday, the prime minister will arrive at the White House and after the book signing ceremony, he will attend two sessions: a small group meeting and an extended meeting. The first meeting will be in the Oval Office and the second in the cabinet room.

He will also have a one-on-one meeting with President Trump. The US leader will accompany him on a White House tour that will give them more time “to mingle and chat”, the foreign minister said. On July 23, US Secretary of State Michael Pompeo will call on the Pakistan’s Prime Minister.

Imran Khan will also address a meeting at the US Institute of Peace and have lunch with newspaper editors. Later, he will go to Capitol Hill for a meeting with the Foreign Relations Committee of the Senate and later address the bipartisan Pakistani American Caucus. So far, 40-plus lawmakers have reportedly already signed up for this meeting. PM Imran will also meet Speaker of the House Nancy Pelosi before returning home on July 23.