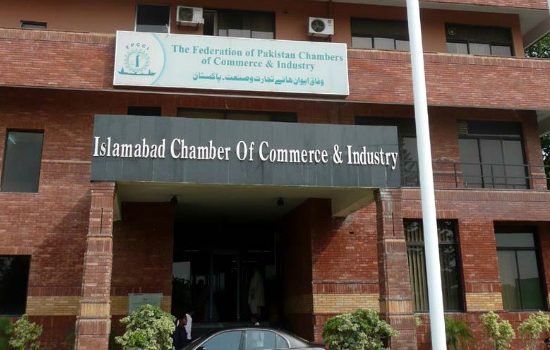 ISLAMABAD: The Islamabad Chamber of Commerce & Industry (ICCI) has urged the government to focus on introducing low-cost credit schemes for the domestic industry in order to improve its productivity, attract new investments and promote exports.

In a statement issued on Tuesday, ICCI President Ahmed Hassan Moughal noted that Pakistan has been depending on foreign loans to run its economy. He called for formulation of such policies that could improve domestic productivity and attract new investments in the country.

He said that at present, the interest rates were so high that no businessman or investor was ready to undertake new business ventures. “The best way to cope with this problem is to come up with low-cost financing schemes for businesses and industries,” he maintained.

Moughal said that many business groups had started expanding their production capacities, but owing to an increase in the cost of capital investment, the businessmen have put their plans on hold.

“In order to reverse this trend, the government, in collaboration with the State Bank of Pakistan, should work out some new schemes to offer long-term finance at 5-6pc interest rate so that purchase of industrial machinery and equipment could be ensured,” he added.

The ICCI president emphasised the need to facilitate certain priority sectors, including engineering, food processing and information technology, where Pakistan has a strong potential to increase exports.

He said that lower interest rates were necessary not only to trigger fresh investment in industrial projects but also to boost the country’s exports.

The ICCI president said that the government should also focus on creating new industrial zones in Islamabad and in other major cities to ensure the development of new industrial estates.

He said many potential investors have the capital to set up industrial units, but they were unable to find land at suitable prices.

Moughal called for establishing industrial zones in cities having a population of one million people, as this would not only help create jobs for the local population but would take some pressure off the bigger cities.