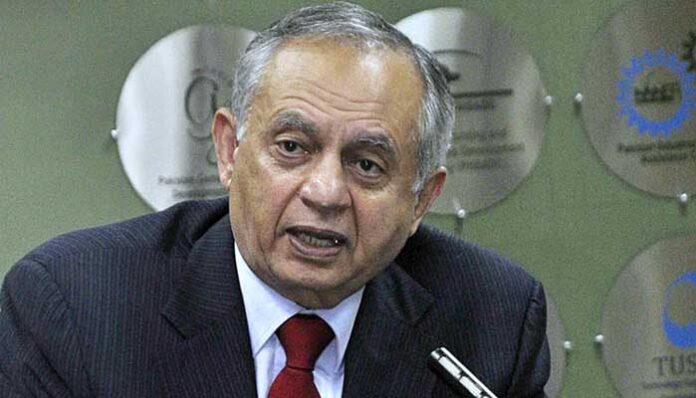 ISLAMABAD: Adviser to Prime Minister on Commerce Abdul Razak Dawood said on Wednesday that Pakistan’s exports had increased by 14.23pc in July this year, as compared to the same month of last year.

He continued that Pakistan’s imports from other countries also reduced by 18.39pc during the month.

Replying to a question, he said that China-Pakistan Free Trade Agreement (CPFTA), a comprehensive tariff policy, reforms in National Tariff Commission (NTC) and an increase in local exports were among the major hallmarks of his ministry during the first year of this government.

He informed media that Afghanistan had offered a Preferential Trade Agreement (PTA) to Pakistan in order to enhance trade between the two countries.

During the visit of Afghan President Ashraf Ghani, both sides had discussed issues pertaining to bilateral transit trade, he said, adding that both countries were willing to increase the volume of bilateral trade.

He said Afghan Ambassador Shukrullah Atif Mashal had invited him to visit Afghanistan on August 20th.

“I will visit Afghanistan to share the agenda of bilateral trade and to chalk out ways to increase the volume of transit trade.”

On a query, the adviser said that Pakistan had successfully gotten market access to the China, European Union (EU), Indonesia, Malaysia and the Association of Southeast Asian Nations (ASEAN).

“We are committed to getting trade access to the potential markets of the United States (US), Canada, Japan, South Korea and Australia so as to increase the volume of our exports,” he maintained.

Regarding his recent visit to South Korea, Dawood informed that during his visit, he held meetings with various Korean companies who were willing to bring their investment to Pakistan, particularly in the textile and agriculture sectors.

He noted that Pakistan has been facing a trade deficit with South Korea, as the former’s exports to latter were $300 million as compared to the imports of $600 million.

“We have arranged the business-to-business meetings with Korean investors in order to negotiate on a Free Trade Agreement (FTA), similar to those it signed with India, Vietnam, Bangladesh and Chile,” he stated. “Both sides decided to hold a working group meeting in October to discuss ways to increase the volume of bilateral trade.”