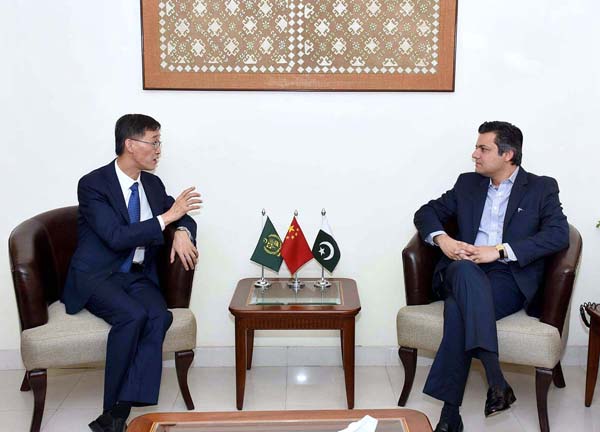 ISLAMABAD: Chinese Ambassador Yao Jing said on Friday that his country was striving to enhance business-to-business (B2B) relationship between the Chinese and Pakistani companies in order to augment Pakistan’s exports.

He said this during a meeting with Economic Affairs Minister Hammad Azhar in Islamabad on Friday.

The ambassador said that China was aiming for technological and industrial development in Pakistan as a priority area, under which the establishment of special economic zones remained an important milestone.

He said his country’s priority in the second phase of the China Pakistan Economic Corridor (CPEC) was socio-economic development of Pakistan, with grant financing for the direct benefit of the common man.

The envoy reiterated his government’s commitment to the strategic relationship with Pakistan and hoped that the appointment of the economic affairs minister would further strengthen the relationship between the two countries.

Jing also updated the minister on the progress made on account of implementation of CPEC-related projects.

Hammad Azhar on the occasion stated that the CPEC was a flagship programme of the Belt and Road Initiative (BRI) which was now entering into a new phase. The minister acknowledged the historic relationship with China and the generous support it has been extending to Pakistan over the years.

He also acknowledged the economic and financial assistance provided by China to Pakistan during difficult times. China’s position on the current situation in occupied Kashmir was vehemently appreciated.

The minister highlighted that priority of this government was now on the development of human capital, giving health and education, clean drinking water and sanitation services to the common man.