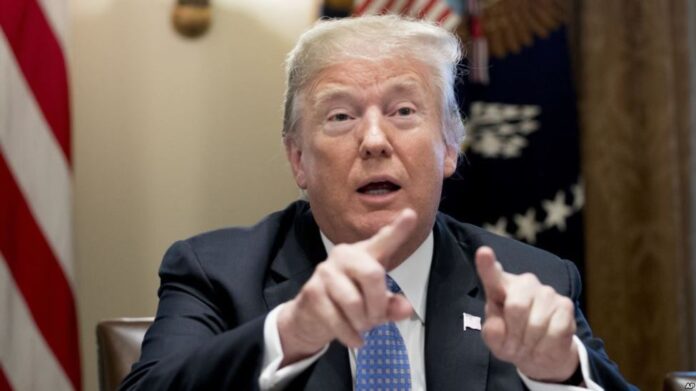 WASHINGTON: President Donald Trump said on Friday he was ordering US companies to look at ways to close their operations in China and make more of their products in the United States instead, sending US markets down sharply in a new rhetorical strike at Beijing as trade tensions mounted.

Trump cannot legally compel US companies to abandon China immediately. He gave no detail on how he might proceed with any such order, although he said he would be offering a response later on Friday to tariffs on $75 billion in American products announced by China earlier in the day.

“Our great American companies are hereby ordered to immediately start looking for an alternative to China, including bringing your companies HOME and making your products in the USA,” Trump wrote on Twitter. “We don’t need China and, frankly, would be far better off without them.”

The US Chamber of Commerce rebuffed Trump’s suggestion and urged China and the United States to quickly reach a deal in the long-running trade issue. “While we share the president’s frustration, we believe that continued, constructive engagement is the right way forward,” the group said.

Experts said tax policy changes and sanctions could be used to restrict or reduce US business activity in China, but it would take years to disentangle the world’s two largest economies. The consequences of a complete break to the world economy would be severe, they said.

China, for instance, holds $1.11 trillion in US Treasury securities.

For many products sold in the United States, there are few alternatives to Chinese production, and shifting production for major goods produced there could take years and be expensive.

American companies could also sue the US government in response to any order to shutter plants in China. The most effective option for Trump would be to restrict federal procurement from any companies that do business in China.