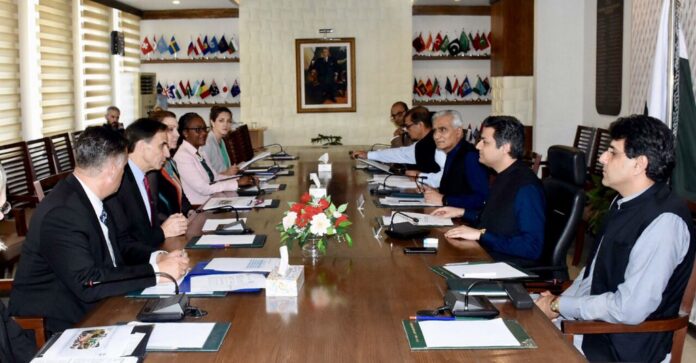 ISLAMABAD: US Ambassador to Pakistan Paul Jones, along with other high ranking officers of USAID and US Bureau of International Narcotics and Law Enforcement-Pakistan (INL-P), held a meeting with Economic Affairs Minister Hammad Azhar on Friday.

The meeting took stock of the existing bilateral economic cooperation between the two countries and discussed ways and means to strengthen bilateral ties.

The US envoy and his team shared with the federal minister details of the ongoing programmes of the USAID and INL-P in Pakistan. The USAID assistance interventions in priority areas, including FATA/KP integration, economic growth, energy, rule of law, education and health, were discussed in detail.

During the meeting, implementation and operational challenges to USAID programmes were also deliberated upon.

Hammad Azhar appreciated the bilateral assistance being provided by the United States in various sectors of the economy. The minister discussed areas of economic cooperation and aid effectiveness with the US ambassador and his team and shared key priorities of the government, which included good governance, poverty alleviation, human capital development, environment, low-cost housing etc.

He assured of complete assistance of his government for the effective implementation of US development assistance programmes in Pakistan.

After discussions, both sides agreed to strengthen and enhance engagement in future programmes, particularly in priority areas of Pakistan, to make them more meaningful. It was also agreed to work together for effective implementation, monitoring & oversight in order to achieve socio-economic gains for the common man of Pakistan.

Meanwhile, IMF Mission Chief Pakistan Ernesto Ramirez Rigo, along with his team, called on Hammad Azhar to discuss the general economic situation of the country.  The minister appraised the IMF team about the structural reforms being carried out and the commitment of the present government to ensure economic stability in Pakistan.

The IMF team expressed satisfaction over the pace of structural reforms and economic stability of Pakistan.