'Tomato crops in Sindh and Balochistan are delayed by over a month, while the supply from Punjab is not sufficient to cater to the total demand' 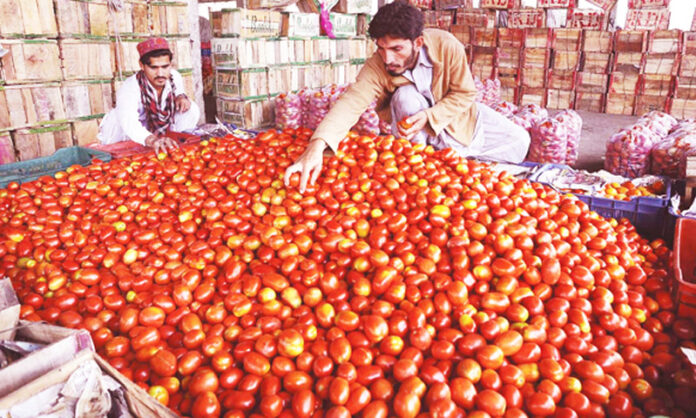 ISLAMABAD: As the shortage of tomatoes in the country has a caused sharp rise in their prices, traders are of the view that the only remedy for the crisis is to immediately import tomato from Iran or Dubai.

“While tomato is already being imported from Afghanistan – catering to the northern part of the country, Pakistan needs to import the main food ingredient from Iran, as the vegetable could reach the local market within four days from there,” said Waheed Ahmed, former chairman and founder of Pakistan Fruit and Vegetable Exporters, Importers and Merchant Association (PFVA).

He said the local crop may arrive in the market in the next 30 to 40 days while price stabilisation may take a few more days.

“If the government wants to intervene in the current hike in the prices of tomato, it needs to issue import permits for at least 30 days,” he suggested, adding that the price of tomato may rise by more than Rs350 per kilogramme in case the short supply continues in the coming days.

According to him, apart from Iran, Pakistan could also import the vegetable from Dubai. However, he added, the import via sea route may take more than a week time.

“We don’t recommend tomato import from India as the crop from Delhi will damage our crop. The government, which has banned all kinds of trade with India, may also not support the import from Delhi,” he said.

The main reason behind the current crisis, he believed, was the impact of global warming, which has disturbed the crop seasons. “The crops in Sindh and Balochistan are already delayed by over a month while the supply from Punjab is not sufficient to cater to the total demand.”

According to the commerce ministry spokesperson, since the import of food items came under the domain of the Ministry of National Food and Security (MNFSR), the commerce division has not discussed the option of allowing the import of tomato to meet domestic demand.

On the other hand, sources at MNFSR said the ministry was yet to decide about the import of tomato. According to ministry officials, the recent wave of cold weather and issues related to transport were the main reasons behind the short supply of tomato.

They said the national highways and motorways were choked after heavy traffic for several days due to the annual Tableegh-e-Ijtima in Raiwand (Lahore). Tomato supply from Khyber Pakhtunkhwa, therefore, took additional time to reach the market, especially in Karachi, and consequently, a demand-supply gap was created, which resulted in the price increase, they added.

However, the figures are in stark contrast to the situation on ground as markets in the twin cities revealed that tomatoes were being sold in the range of Rs200-250 per kg, while they were being sold at Rs300 per kg in Karachi and some other parts of the country, recording an increase of up to Rs150 in a single day.