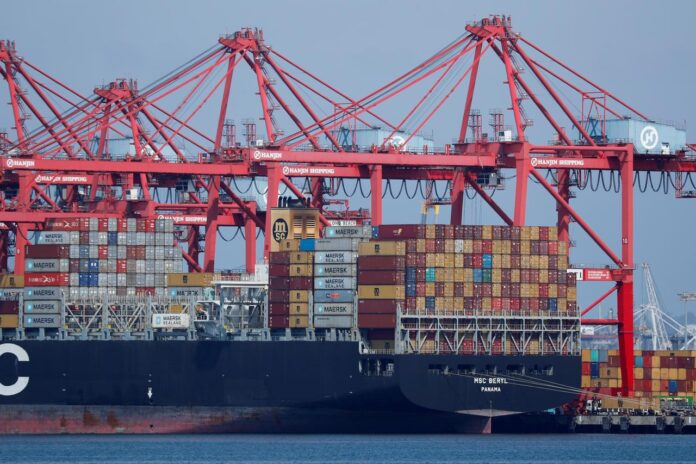 WASHINGTON: The US goods trade deficit fell sharply in October as both exports and imports declined, pointing to a continued reduction in trade flows that has been blamed on the Trump administration’s “America First” policy.

Exports fell 0.7pc after decreasing 1.3pc in September. Exports were depressed by a drop in shipments of foods and feeds, likely soybeans. Automobile exports also declined and were probably weighed down by a 40-day strike at General Motors, which undercut motor vehicle production.

There were also decreases in exports of capital and consumer goods. Exports of industrial supplies, however, rose.

Goods imports tumbled 2.4pc in October after falling 2.1pc in the prior month, amid decreases in imports of industrial supplies, motor vehicles and consumer goods. Imports of capital goods rebounded modestly.

The shrinking trade gap is positive for the calculation of gross domestic product and suggests trade could support the economy in the fourth quarter as growth slows amid cooling consumer spending and persistent weakness in business investment.

But the continued decline in both exports and imports is a worrying trend. The White House’s protectionist trade policy has left the United States embroiled in a trade war with China and engaged tit-for-tat tariffs with other countries. The government argues that the tariffs are necessary to protect manufacturers from what it says is unfair foreign competition.

Trade subtracted 0.08 percentage point from GDP growth in the third quarter. The economy grew at a 1.9pc annualized rate in the July-September quarter after expanding at a 2.0pc pace in the second quarter. Growth estimates for the fourth quarter are below a 2.0pc rate.

The Commerce Department also reported on Tuesday that retail inventories increased 0.3pc in October after gaining 0.2pc in the prior month. Motor vehicle and parts inventories dipped 0.1pc after edging up 0.1pc in September. They were likely restrained by the GM strike.

Retail inventories, excluding motor vehicles and parts, the component that goes into the calculation of gross domestic product jumped 0.6pc after rising 0.2pc in September.

Data this month showed a modest rebound in retail sales in October and continued decline in production at factories. The economy is losing speed mainly because of the 16-month US-China trade war. The fading stimulus from last year’s $1.5 trillion tax cut package is also constraining growth.