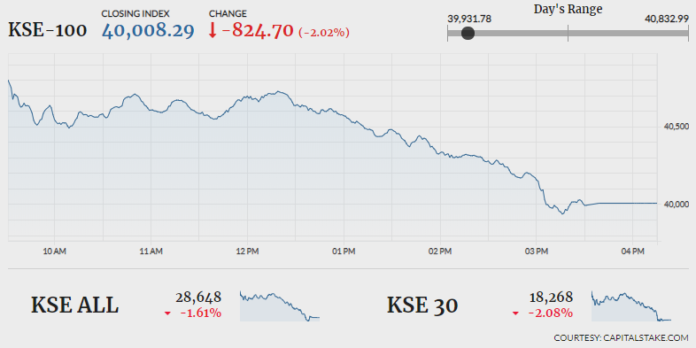 KARACHI: It was a dull start to the week at the Pakistan Stock Exchange (PSX), as the indices crumbled with the benchmark KSE-100 Index breaking below the 40,000-mark.

According to analysts, shabby market performance on Monday was due to the absence of positive triggers and possible carryover from last week’s jump in political noise.

In the overall market, the refinery sector lost 4.43pc from its cumulative market capitalization, while oil & gas marketing sector was down by 3.14pc and oil & gas exploration sector by 2.80pc. Out of the total traded scripts, only 41 scrips advanced while 263 declined.

Meanwhile, Noon Sugar Limited (NONS -4.96pc) and Shahmurad Sugar (SHSML -5.00pc) announced their financial results for FY19. Sales contracted by 9.60pc to Rs5.67 billion for NONS, while it expanded by 31.54pc to Rs9.45 billion for SHSML. Earnings per share for NONS was recorded at Rs13.64, 7pc higher than last year. On the other hand, profits for SHSML recoded a 101pc rise, converting into an EPS of Rs57.08.