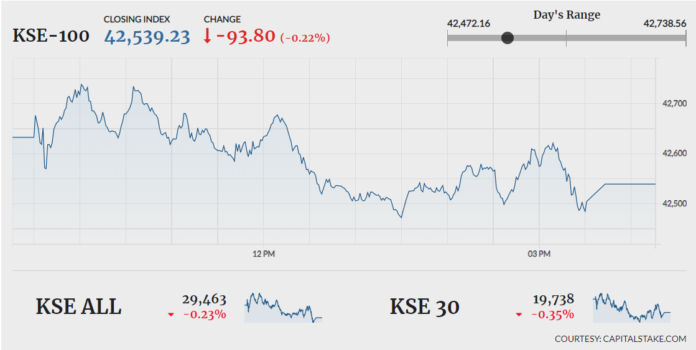 KARACHI: Investors of the Pakistan Stock Exchange (PSX) witnessed a lacklustre start to the trading week, as the indices, after swinging in both directions, ended in the negative zone.

Analysts believe that the investors’ confidence remained subdued on Monday as they wait for the State Bank of Pakistan’s monetary policy announcement, due on Tuesday (tomorrow). The interest rates had remained unchanged in the last two meetings at 13.25pc.

On the market front, Fauji Foods Limited (FFL -5.98pc) announced its financials for the second quarter of FY20. The company’s revenue shrunk by 25pc from 2QFY19 to Rs5.74 billion, its gross loss increased by 131pc, while finance cost jumped from Rs674.79 million to Rs1.69 billion. As a result, FFL’s earnings per share deteriorated from Rs-5.39 to Rs-10.96.

Meanwhile, JDW Sugar Mills Limited (JDWS +2.95pc) announced its financial performance for the first quarter of FY20. The company’s sales increased by 62pc to Rs13.19 billion YoY, which resulted in its gross profit margin surging from 6.59pc to 10.98pc. The company’s earnings per share improved from Rs-5.91 in 1QFY19 to Rs2.32 in 1QFY20.