Pakistan looks to involve Turkey in CPEC as Erdogan arrives 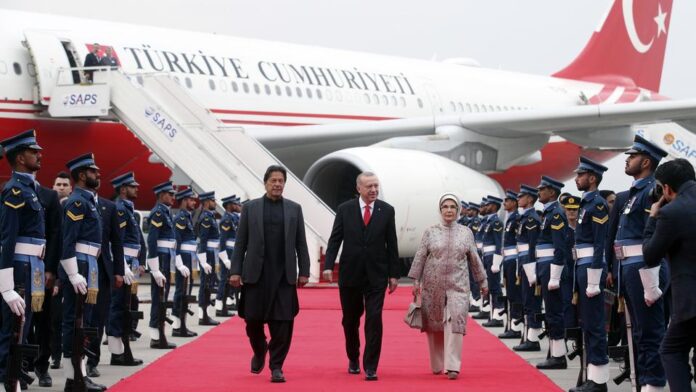 ISLAMABAD: In a bid to strengthen bilateral strategic partnership, Turkish President Recep Tayyip Erdogan and First Lady Emine Erdoğan arrived in Pakistan on Thursday on a two-day visit and were received by Prime Minister Imran Khan at the Nur Khan Airbase.

The premier personally drove the special foreign guests from the airport to the Prime Minister House, where the Turkish president was presented a guard of honour by a smartly turned-out contingent of armed forces in the presence of senior cabinet members and government officials.

Later in the evening, President Erdogan called on President Arif Alvi at President’s House where the latter hosted a reception in his honour.

During a meeting between the two, Alvi and Erdogan affirmed that Pakistan and Turkey would continue to extend mutual support on issues of each other’s core national interest.

They also underscored the importance of fully realizing the immense potential of relationship between the two countries and transforming it into a strong and dynamic trade and economic partnership.

President Alvi said that the 6th Session of High Level Strategic Cooperation Council would further strengthen and broaden the fraternal relations between Pakistan and Turkey.

According to the Foreign Office (FO), the Turkish president is visiting Pakistan for underscoring “traditional solidarity and affinity” between the two countries and further “deepening and broadening of the flourishing Pakistan-Turkey strategic partnership”.

Erdogan, who is accompanied on the trip by his cabinet members, senior government officials and leading Turkish business figures, would co-chair with Prime Minister Imran the 6th session of the Pakistan-Turkey High Level Strategic Cooperation Council (HLSCC), address a joint session of parliament on Friday for the record fourth time and speak at the Pakistan-Turkey Business and Investment Forum.

Talking to Anadolu Agency, Turkish Ambassador to Pakistan Mustafa Yurdakul said that President Erdogan’s visit to Islamabad is a historic event and “a major step towards exemplary bilateral ties between the two countries”.

Prime Minister Imran is expected to invite Turkey to join the China-Pakistan Economic Corridor (CPEC). In an interview with a Turkish newswire, he had said, “We hope to involve them in using CPEC for further connectivity, and we hope to involve Turkey in this [CPEC]”.

The Turkish ambassador said that CPEC is nearly completed and that Turkey is interested in becoming a part of special economic zones which will be established under the project.

About the proposals for promoting economic ties, the FO said, “Both sides place a strong emphasis on forging a robust economic relationship.”

“Pakistan and Turkey have a unique and abiding relationship characterised by mutual support and exceptional mutual trust and understanding. The two brotherly countries have always been each other’s steadfast partners. Turkey supports the cause of self-determination for the people of Indian Occupied Kashmir (IOK). Pakistan stands by Turkey on the question of Cyprus,” the FO added.

Turkey and Pakistan are expected to sign a number of important agreements/memorandums of understanding to formalise some of the understandings that would be reached during the HLSCC meeting.

ISLAMABAD: Federal Minister for Industries and Production Hammad Azhar on Saturday rolled out a restructuring plan for Pakistan Steel Mills (PSM), according to which...
Read more
HEADLINES

ISLAMABAD: Tourism experts have pleaded for a grant of soft loans and cash assistance for tourism businesses and low-paid workers under the government's loan...
Read more
HEADLINES

KARACHI: AirSial, previously expected to launch flight operations in June 2020, has delayed its launch due to Covid-19 and restrictions on air travel. However,...
Read more
HEADLINES

KASUR: As many as 360 brick kilns have been switched over to zigzag technology in Kasur district while other kilns owners were being forced...
Read more

November 29, 2020
SIALKOT: Special Assistant to the Prime Minister (SAPM) on Youth Affairs Muhammad Usman Dar on Sunday announced that the government was going to launch...