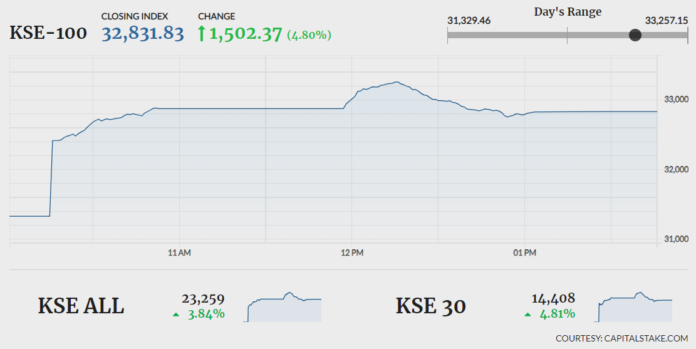 Following an unprecedented surge in early trade, the KSE-30 Index hit its upper level for the first time, causing a 60-minute market halt at 10:52am.

According to analysts, optimism prevailed at the bourse following a slash in interest rates by the State Bank of Pakistan. The SBP’s Monetary Policy Committee had lowered key interest rate from 11pc to 9pc.

“A host of factors resulted in changing the market mood, including a surprise rate cut by the SBP, deferment of G20 debt payments, and the IMF providing COVID-19 relief fund to Pakistan,” said an analyst at Arif Habib Ltd.

Meanwhile, International Industries Limited (INIL +7.49pc) announced its financial performance for the third quarter of FY20. The company reported a 39pc YoY decline in sales and a 99pc YoY drop in ‘other income’. As the company’s finance cost almost doubled during the period under review, its earnings per share dropped from Rs3.31 in 3QFY19 to Rs-2.57.