Saudi Arabia gets physical with Russia in underground oil bout 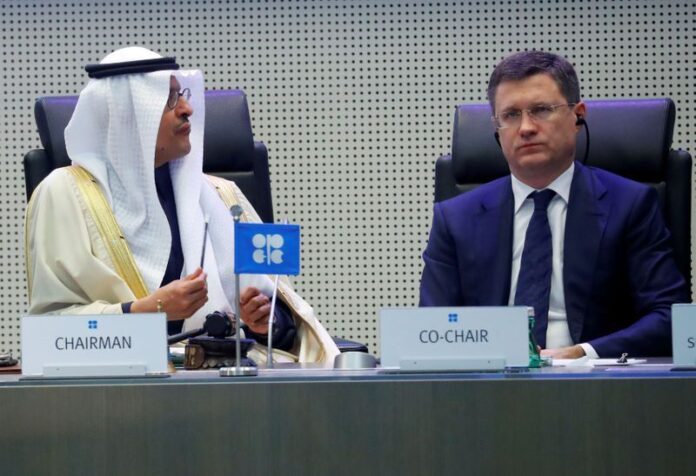 MOSCOW: Behind a Saudi-Russian truce to stabilise oil markets with a record output cut, market players are seeing the two production heavyweights still trading blows in the physical market.

It is here, rather than in the world of futures prices, that a long-standing battle for market share carries on, particularly in Asia, shipping data analysed on Monday by Reuters shows.

The rivals said last week they were ready to take measures if necessary to balance the market by cutting combined output with other OPEC+ members from May.

“Beyond the cooperative statements the fight is still going on,” a source at a trading firm told Reuters, adding that Saudi Arabia’s official selling prices (OSPs) signalled that the kingdom was targeting the Asian market, where demand remains relatively resilient during a global slowdown.

Russia has relied on Asian markets as a destination for its oil output since launching the 1.6 million barrel per day ESPO pipeline. This connects Russian fields to Asian markets through the port of Kozmino, the country’s main eastern export outlet, and also via a pipeline spur with China, the biggest Asian consumer.

Aramco cut its OSPs to Asia in May by $3 to $5 across all its grades, marking a second month of drastic cuts. Meanwhile, the price reductions on Aramco cargoes to Europe were smaller, with a few increases on its heavier grades.

Likewise, Iraq, the United Arab Emirates and Kuwait slashed May prices on crude destined for Asia.

High supplies of May-loading Saudi crude oil to Asian markets, along with lower OSPs, have tipped differentials of Russian grades like Sokol SOK-DUB and ESPO Blend ESPO-DUB in Asia into freefall.

Both grades, which usually trade at high premiums to the Dubai benchmark, hit record discounts.

Saudi sales to Europe are poised to surpass 29 million barrels in April, slightly less than the record of August 2016, shipping data available in Refinitiv Eikon showed.

Supplies of Aramco’s Arab crude oil including Arab Light, the closest grade to Russian flagship in terms of quality, will rise to Italy, Turkey, Greece, France and Poland in April.

All of these countries are regular buyers of Russian oil.

Polish refineries will import a record 560,000 tonnes of Arab Light crude via Gdansk in April, the data shows.

Poland will not import any sea-borne Russia’s Urals crude this month, for the first time in a long period, while Arab Light oil supplies to Poland will be steady in May, traders said.

“As demand is falling the competition gets even tougher. (The) Saudis don’t mind going the extra mile for the buyer,” a source at a European refiner told Reuters.

In an effort to further entice buyers, Aramco has offered refiners in Asia and Europe the option to defer payments for crude cargo deliveries by up to 90 days, Reuters reported.

Russia’s main advantage in the physical market fight with Saudi Arabia is its sprawling pipeline network, helping it place oil at cheaper rates compared to its rival which has to find tankers and pay for transportation, traders said.

“Russian oil fields (are) connected to refineries in Europe and Asia and oil companies have long-term contracts with them,” a trader in the European oil market told Reuters.

“Unlike Saudi Arabia it is not subject to freight rates and vessel availability.”