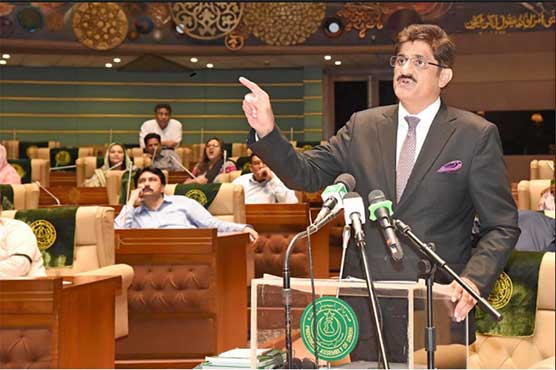 –Rs23bn earmarked for education, Rs28bn for health and Rs5bn for Covid-19 prevention

–CM says no new tax will be introduced in FY21; announces up to 10pc increase in govt employees’ salaries

Total revenue for the year has been budgeted at Rs1.08 trillion, to be raised through federal transfers of Rs774.715 billion and provincial revenue of Rs313.391 billion.

On a whole, the Sindh government has allocated Rs23 billion for education, Rs28 billion for health, Rs10 billion for agriculture, and Rs5 billion for the prevention of Covid-19 in FY21.

Education accounts for 25.2pc of the budget.

A significant share of the provincial receipts is to be raised in the form of indirect taxes, budgeted at Rs169.073 billion, which include sales tax, provincial excise duty, stamp duty, motor vehicle taxes etc.

Interestingly, the government has planned to generate Rs49.871 billion through income from property and enterprise, receipts from civil administration, and miscellaneous receipts.

The chief minister stated that there has been no further introduction of the tax in the budget, whereas the increase in non-development expenditure has been restricted to 7pc.

“Due to poor receipts, we had to cut down our development expenditure, which now stands at Rs172.941 billion for the current financial year,” CM Murad stated. “Many development schemes that could have been completed had been delayed due to the non-availability of funds.”

The CM noted that the austerity measures shown with regard to the non-development budget had given the government an opportunity to spend more on development in this budget.

“During the financial year 2018-19, we had to cut on the operating expenses. The Repair & Maintenance budget of the departments had been substantially reduced from Rs30.8 billion to Rs26.8 billion,” he informed.

“I must reiterate that we were able to control the deficit only because of budgetary cuts as we timely adopted austerity measures. I am thankful to all the departments and offices that continued to serve the people despite financial difficulties.”

The CM explained that the increase in non-development expenditure can be attributed to Covid-19 and the subsequent Social Protection and Economic Sustainability Package of Rs34.2 billion. He added that this would inject Rs19 billion in the health sector and Rs22.9 billion in the education sector.

While speaking about the health crisis at hand, CM Murad announced that the estimate for expenditure on health risk allowance has been set at Rs1 billion, adding that there were 81 quarantine centres in the province with a testing capacity of 11,450 tests per day.

The CM said that 101 additional ventilators have been bought and Rs5 billion have been allocated with regard to measures needed for the pandemic.

The budget of education departments has been increased by 10.2pc to Rs243.14 billion to ensure quality education and to address post-epidemic education challenges.

“We have developed the Sindh Education Sector Plan & Roadmap (2019-23) through a consultative process. The civil society, intelligentsia and academia were taken on board, as we consider them equal stakeholders in the development of the society.”

The school education portfolio has been allocated Rs15.15 billion for 279 schemes (188 ongoing and 91 new schemes).

For universities and boards; the government has earmarked Rs3.0 billion, through which various initiatives relating to higher education will be financed. These include the establishment of Center of Robotics, Artificial Intelligence and Blockchain – at Sukkur IBA University, establishment of Thar Institute of Technology ay NED Campus of Tharparkar, and the establishment of Sindh University Campus at Badin and Mirpurkhas.

Moreover, the government has earmarked Rs17 billion for the irrigation department, whereas Rs10 billion have been allocated for agriculture.

Considering the locust situation, Rs440 million has been budgeted for locust control, besides Rs1 billion “Subsidy for Pesticides” to small farmers.