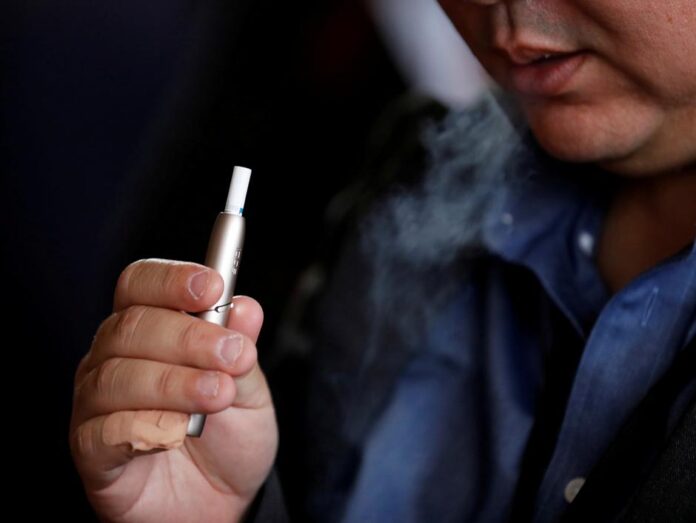 ISLAMABAD: While the concerned regulatory authorities are yet to formulate a policy regarding cigarette alternatives, the marketing of e-cigarettes has already started in various parts of the country.

Keeping in view the growing demand for less harmful tobacco products, big tobacco companies in the country are also planning to introduce the latest heated tobacco devices in the country, sources in the tobacco industry informed this scribe.

They said many tobacco stores in Pakistan are directly selling vapes to customers, while a majority of such devices are also being sold online.

Sources said that e-cigarettes are considered to be 96pc safer than traditional cigarettes, adding that the online sale of the products is mainly non-duty paid.

“There is a brand called ‘Switch’ which is being sold in Pakistan,” an insider said and claimed that heated tobacco products would soon be available across the country.

“Instead of banning the products, the government should look into the matter and regulate the sale of e-cigarettes. It will also encourage a cigarette smoker to shift to reduced-risk products,” said an official of a prominent cigarette company.

He suggested the regulators make policies for cigarette alternates and to counter the e-cigarettes being smuggled into the country.

Last week, the US Food and Drug Administration had authorized the marketing of what they referred to as a ‘Tobacco Heating System’ as modified risk tobacco products (MRTPs). This was the first time a tobacco product had attained “exposure modification”.

According to Mitch Zeller, director of the FDA’s Center for Tobacco Products, “The marketing of these particular products with the authorized information could help addicted adult smokers transition away from combusted cigarettes and reduce their exposure to harmful chemicals, but only if they completely switch.”

Almost all the harm from smoking is caused by the thousands of toxins in smoke produced by burning tobacco. It is well known that ‘smokers smoke for nicotine but are killed by tar’.

According to the UK Royal College of Physicians, “If nicotine could be delivered effectively and acceptably to smokers without smoke, most if not all of the harm of smoking could probably be avoided.”

Products that deliver nicotine have different levels of risk, with cigarette smoking being the most harmful. As per the available data, e-cigarettes have an estimated 4pc risk compared to cigarette smoking and nicotine patches have an estimated 2pc risk. Tobacco harm reduction involves switching from the risky end of the spectrum to nicotine products at the less harmful end of the range.

There are three smoke-free nicotine products which have been used by millions of smokers to quit globally. These include electronic cigarettes, snus and the more advanced heated tobacco products (also known as heat-not-burn or HnB).

All these products deliver nicotine to satisfy nicotine cravings. Electronic cigarettes and HnB products have the added advantage of replicating the familiar hand-to-mouth ritual and sensations of smoking which smokers can find very hard to stop.

While not risk-free, the overwhelming scientific consensus is that these products deliver far lower levels of toxic and harmful compounds than combustible cigarettes. If a smoker switches completely from smoking he/she is likely to have substantial improvements in health. The preferred goal from a health point of view should of course always be to stop smoking.

According to experts quitting smoking and nicotine completely is clearly the most effective strategy for reducing the harm from smoking. However, smoking is a very powerful addiction and can be very hard to stop. Many smokers try and fail repeatedly to quit even with professional support and stop-smoking medications. Up to two in three continuing smokers will die prematurely from a smoking-related illness.

Tobacco harm reduction refers to switching to a less harmful nicotine product for those who are not able to quit smoking or nicotine use. Nicotine is the main reason people continue to smoke but it has relatively minor health effects, except in pregnancy. The focus is on preventing harm and not on preventing the use of nicotine itself.

Following the government;s decision to increase petrol prices on Saturday, intercity transporters in Lahore have hiked tickets in response as well by 15 to...
Read more
- Advertisement -

October 17, 2021
MUMBAI: A powerful right-wing Hindu group linked to India's ruling party has called for curbs on streaming platforms and cryptocurrencies, saying regulation was essential. "There...