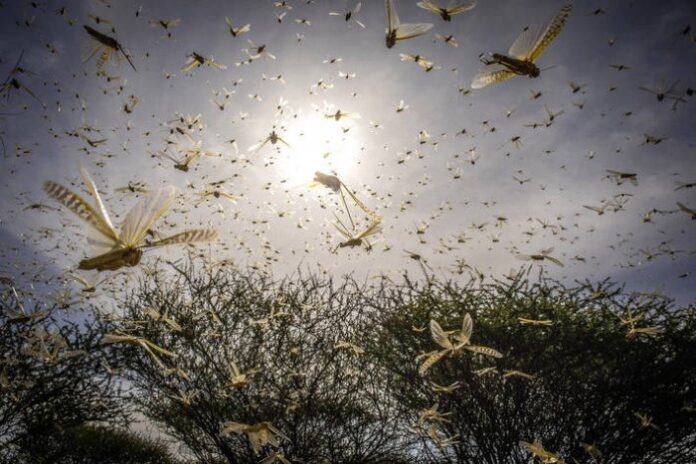 BEIJING: China Meteorological Administration (CMA) has released special reports on remote sensing data of locust attacks in Pakistan, which according to media reports, can be used to monitor desert locusts and provide early warnings to relevant parties in the country.

It said that a hotter and wetter climate favours more multiplication of locusts, and studies have also linked wind direction, speed, and other weather parameters to the migration of locusts, besides, it added that Fengyun satellites were helpful in the assessment of vegetation damage.

According to an update from the Food and Agriculture Organisation (FAO) of the United Nations, the summer breeding of desert locust swarms has commenced in Pakistan’s Tharparkar, Nara and Cholistan deserts where hatching and band formation will increase later this month.

Locust swarms ravaged crops and pastureland, destroyed food and vegetation and jeopardised food security across Africa, the Arabian Peninsula, and parts of South Asia. Fengyun-3 (FY-3) polar orbit meteorological satellite, therefore, is used to monitor how the crops are growing.

With the monitoring data generated by FY-3, Pakistani scientists can offer remote sensing-based assessment of vegetation damage in locust-invaded areas. According to the CMA, the Pakistan Meteorological Department (PMD) has been using data collected from China’s CMACast – an updated satellite data broadcast system based on digital video broadcasting.

In addition, data collected by China’s Meteorological Information Comprehensive Analysis and Process System (MICAPS) has been used by Pakistan to analyse and forecast weather for relevant institutions and the public.