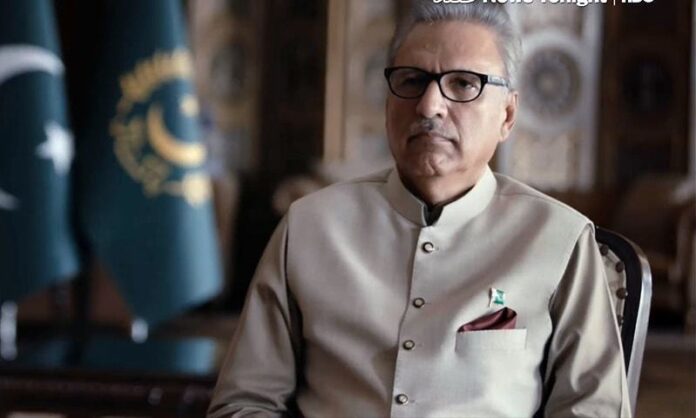 KARACHI: President Arif Alvi, while addressing a webinar arranged by Karachi Council on Foreign Relations (KCFR) on China-Pakistan Economic Corridor (CPEC), expressed his satisfaction regarding progress on CPEC projects being undertaken in Pakistan.

President Arif Alvi while addressing the participants appreciated the Chinese leadership for their work pertaining to CPEC and Belt and Road Initiative (BRI).

The president added that peace is central to the smooth operation of the trade routes.

“Friendship between China and Pakistan is deeper than the ocean and higher than the skies,” said President Arif Alvi.

He said that the government expects Chinese’s investment and cooperation in every sector of the economy.

Chinese Ambassador Yao Jing while addressing the webinar said that the Chinese government and people appreciate the solidarity and support shown by the Pakistani government and the people of Pakistan.

He said that China is still trying to revive its economy that has gone into a slump due to the Covid-19 pandemic.

He said in the post Covid-19 world, CPEC will enhance cooperation between the two countries.

He said that the Chinese business community and the government is committed to the CPEC projects and will extend their full cooperation.

CPEC Authority Chairman Asim Saleem Bajwa said that CPEC is one of the most successful collaborations between Pakistan and China, adding that CPEC has been designed in three phases.

Phase one of CPEC includes short term projects which are meant to fill the gaps in the construction and energy sector and identify three routes being built under the CPEC project connecting all major cities of Pakistan with seaports.

He said that under CPEC for the first time corporate farming has been introduced, which will enhance yield for farmers. He further said that the government wants to invite Chinese companies to build port infrastructure.

KCFR Chairman Ikram Sehgal said that the CPEC will change the geopolitical dynamics of the world. He identifies that due to BRI the intercontinental distances have been decreased.

He said that Charbahar port in Iran has been taken over by China, which has technically turned the project into a “China, Iran and Pakistan economic corridor”.

He further said that building roads in Balochistan would not have been possible without the support of Pakistan armed forces.