Eight agri research centres to be established under CPEC: envoy 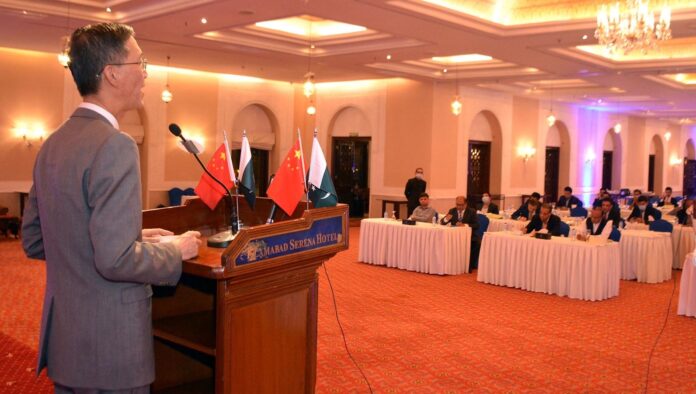 In a farewell briefing to media, Ambassador Yao Jing said that agricultural cooperation between the two countries would include both government-to-government (G2G) research and business-to-business (B2B) interaction.

“Under the G2G mode, a pest control centre would be established in Karachi, while under the B2B mode, Pakistani companies would forge cooperation with Chinese private companies,” he explained, adding that two Pakistani companies have already been identified in this regard.

“For south Balochistan, the Pakistani government wants to build a dates’ processing factory, whereas a mango processing plant is also being discussed. Plantation of oilseeds would be encouraged in the area and establishment of a meat processing unit is also on the cards.”

Regarding his farewell, the envoy said that he had served in Pakistan for 11 years and that he thoroughly enjoyed his stay.

“I cherished my stay here and it’s a very emotional departure as I won’t be appointed in Pakistan anymore. I spent one third of my career in the service of China-Pakistan friendship,” he said.

Yao Jing maintained the CPEC cooperation has been further consolidated in past three years and he was very happy the way Prime Minister Imran Khan and Pakistani government are handling the CPEC projects.

He said that 16 projects have been completed so far under the CPEC, including KKH second phase and Orange Line Metro Train.

Mian Abrar
The writer heads Pakistan Today's Islamabad Bureau. He has a special focus on counter-terrorism and inter-state relations in Asia, Asia Pacific and South East Asia regions. He can be reached at [email protected].com