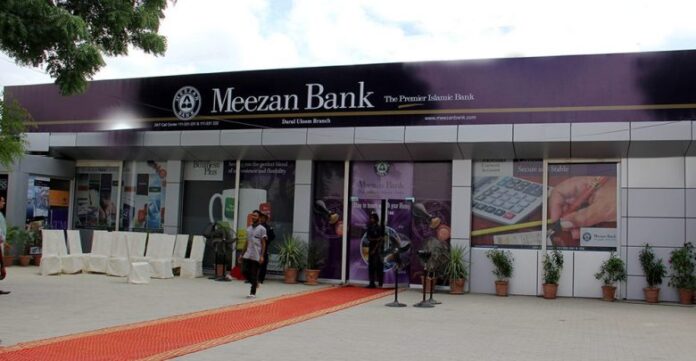 KARACHI: The Meezan Bank Board of Directors met on Thursday to approve the financial statement for the nine-month period ending September 30.

According to the financial statements, the bank’s after-tax profit stood at Rs18.1 billion for the nine-month period, compared to the Rs10.9 billion in the corresponding period the year before. This is a 65pc jump over last year. Specifically, in the third quarter of 2020, the bank’s profit after taxation stood at Rs6.4 billion.

The bank’s corresponding earnings per share for the nine-month period rose to Rs12.78, compared to Rs7.73 in the corresponding period last year. The bank’s board also approved a 40pc interim cash dividend for all shareholders, or Rs4 per share. The cash dividend was in addition to a 10pc bonus share issue announced in the last quarter.

The net spread earned registered a 50pc growth over the same period last year by jumping from Rs33,161 million to Rs49,755 million. This is primarily due to the high volume of earning assets portfolio and favorable time-lag in asset repricing. Additionally, this was also due to the build up in the current account deposits which account for 38pc of the total deposits.

Meezan Bank’s other income grew by 7pc, from Rs6.72 billion last year to Rs7.17 billion this year. This was primarily due to gain of Rs935 million on sale of securities. The bank’s fee and commission income remained lower than the corresponding period last year, due to lower transaction volume and waiver of certain fee on digital transactions. The operating income of the Bank, accordingly, grew by 43pc, from Rs39.9 billion in September 2019 to Rs56.9 billion in September 2020.

However, administrative and other operating expenses increased to Rs22.7 billion from the Rs18.4 billion in the corresponding period last year. This was mostly due to the opening of 113 new branches since September 2019. Meezan Bank now has a total network size of 802 branches in more than 240 cities in Pakistan. According to the bank, this rise in expenses is sufficiently absorbed growth in the bank’s operating income, which means an improved income efficiency ratio at 40pc, compared to 46pc in September 2019.

The bank’s total deposits stood at Rs1.09 trillion, which is a 17pc increase from December 2019. The growth in deposits mostly came from an increase in the current account and savings account deposits which contributed 95pc to the total increase. That is how the bank’s CASA ratio stood at 77pc in 2020, compared to 74pc in 2019.

The bank’s investments portfolio grew by 61pc, closing in at Rs362 billion, compared to Rs226 billion last year. During the period, the bank invested Rs104 billion and Rs34 billion in the government of Pakistan Ijarah Sukuk and Pakistan Energy Sukuk – II respectively.

Meezan Bank’s Islamic financing closed at Rs490 billion as of September 2020.  According to the bank, “The financing portfolio is comprised of high-quality customers and is well diversified with representation in all sectors of the economy. This is reflected in the fact that only 6% of the Bank’s financing portfolio opted for the deferment option that was allowed under one of SBP’s relief measures.”

The results were generally above analyst expectations. In particular, analysts pointed to the favourable repricing of assets, which helped with earnings. The higher than expected dividend announcement also resulted in the stock hitting levels close to the upper circuit.

Meezan Bank originally started off in 1997 as Al-Meezan Investment Bank, an Islamic investment bank. The bank was created by Irfan Siddiqui, its first CEO, who raised the financing for the creation of the bank from investors in the Gulf Arab states. In the bank’s initial days, the bank relied heavily on lending to small and medium-sized businesses, who were looking to an alternative to conventional banking.

Since 2001, Meezan Bank’s deposit base has grown at an average rate of 37.7pc per year. In just the last five years, Meezan’s deposits grew by an average of 19.6pc per year compared to 12pc per year for the industry as a whole. In terms of profitability, Meezan Bank is the most profitable bank in the country: its return on equity in 2019 hit 36.2pc, the highest among all Pakistani banks.

Asian Banker, a Singapore based magazine, rated Meezan Bank as the 17th strongest bank among 500 banks in 23 countries across the Asia Pacific region, and the 10th strongest among 100 Islamic banks in the Asia Pacific, Middle East and Africa region in 2019. Amongst the Pakistani banks, Meezan Bank was only second to Bank Al Habib according to the 2018 rankings. However, in 2019 amongst the eight Pakistani banks that made it to the Asian Banker magazine’s top 500 banks for 2019 list, Meezan Bank, was he highest-rated bank by a very significant margin.