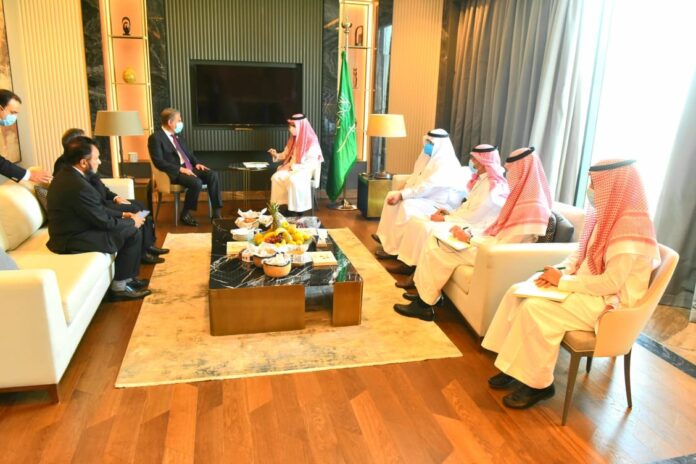 ISLAMABAD: Pakistan and Saudi Arabia have agreed to further promote bilateral cooperation in diverse fields of economy, particularly in the energy sector.

The understanding was reached during a meeting between Foreign Minister Shah Mahmood Qureshi and his Saudi counterpart Faisal bin Farhan Al-Saud on the sidelines of the 47th session of OIC Council of Foreign Ministers in Niamey, Niger, according to a statement issued on Friday.

The Saudi foreign minister said his country holds in high esteem its historical, deep and long-lasting relations with Pakistan, and is committed to promoting bilateral cooperation in various fields. He appreciated the efforts made by Pakistan for establishing peace in the region.

Foreign Minister Qursehi apprised his Saudi counterpart of the grave situation in Indian Illegally Occupied Jammu and Kashmir. He also thanked the Saudi foreign minister for principled and permanent support to the Kashmir issue.

Meanwhile, during his meeting with Afghan counterpart Mohammed Haneef Atmar in Niamey, Shah Mahmood Qureshi has said that Pakistan desires peace in Afghanistan besides dignified and honourable return of Afghan refugees to their homeland.

He said that Pakistan will continue to play its conciliatory role for peace in the neighbouring country, adding that the Afghan leadership should remain cognisant of the elements that want to sabotage peace efforts in Afghanistan. Qureshi reaffirmed Pakistan’s commitment to further strengthen bilateral relations with Afghanistan.

Moreover, in another meeting with Chadian counterpart Amine Abba-Sidick on Friday, Shah Mahmood Qureshi underscored the importance of deepening and expanding economic and commercial ties between the two countries.