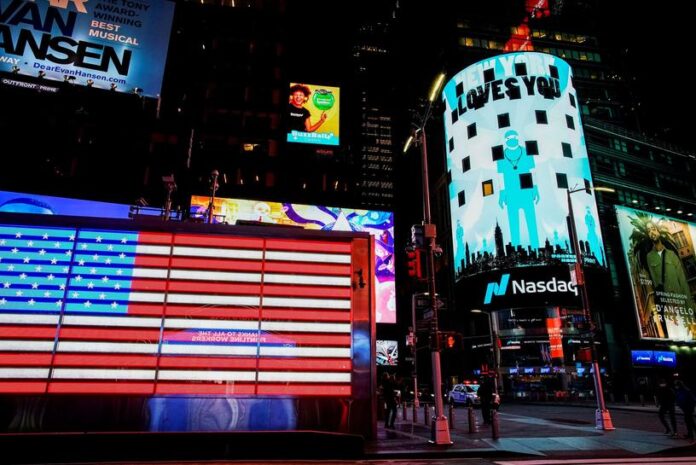 LONDON: World stocks skirted towards record highs on Wednesday on the prospect of a coronavirus vaccine and additional US economic stimulus, though enthusiasm for riskier assets left the dollar stuck near a 2-1/2 year low.

Britain approved Pfizer’s PFE.N Covid-19 vaccine on Wednesday, jumping ahead of the United States and Europe to become the first country to formally endorse a shot it said should reach the most vulnerable people early next week.

The two drug firms and competitor Moderna have also sought emergency use approval from European regulators this week, while US health officials have announced plans to start vaccinating Americans as early as mid-December, once regulatory approvals are in place.

“Early vaccines will help bolster the reflation and normalcy trade, which has been the key macro theme in driving equity markets,” said Neil MacKinnon, global macro strategist at VTB Capital.

“Equity bulls will be hoping that the vaccine news is not an example of ‘buy the rumour, sell the fact’,” he added, saying there was a risk stock markets have already been “priced to perfection”.

Despite the positive news, European stocks failed to add to their recent surge but MSCI’s gauge of stocks across the globe inched up 0.4pc to keep it near an all-time high set in the previous session.

The dollar edged off 2-1/2 year lows against the euro and a basket of major currencies hit earlier on Wednesday.

“General risk sentiment is unchanged – perhaps there’s a bit of consolidation today but that’s understandable given where we’ve come from since November,” said Derek Halpenny, EMEA head of research for global markets at MUFG. The dollar lost more than 2.5pc of its value in November.

Shares in BioNTech surged by more than 8pc before trimming gains, though European shares slipped overall by 0.32pc, hovering below recent nine-month highs.

Yields on euro zone government bonds edged up to their highest in three weeks at -0.51pc before weakening to -0.525pc at 1153 GMT.

ECB Board member Philip Lane is due to speak as part of the Thomson Reuters Global Investment Summit at 1400 GMT, ahead of a Dec. 10 ECB policy meeting which is expected to increase and extend the central bank’s Pandemic Emergency Purchase Programme.

Markets were buoyed on Tuesday after top U.S. Senate Republican Mitch McConnell said that Congress should include new coronavirus stimulus in a $1.4 trillion spending bill aimed at heading off a government shutdown in the midst of the pandemic.

US President-elect Joe Biden told the New York Times his priority is getting a generous aid package through Congress even before he takes office in January.

Gold rose 0.6pc as signs of progress on the relief package bolstered bullion’s appeal as a hedge against possible inflation.

The US House of Representatives is expected to pass legislation later on Wednesday that could prevent some Chinese companies from listing their shares on U.S. exchanges unless they adhere to US auditing standards, congressional aides said.

The bill would give Chinese companies like Alibaba, tech firm Pinduoduo Inc. and oil giant PetroChina Co Ltd. three years to comply with US rules before being removed from US markets.

The pound was under some pressure, with doubts remaining over whether Britain can agree a trade deal with the European Union.

In Asia, shares in China recovered from early losses and rose 0.12pc.

Oil prices dropped after OPEC and its allies left markets in limbo by postponing a formal meeting to decide whether to lift output in January.