Amnesty calls on Israel to give Palestinians virus vaccine 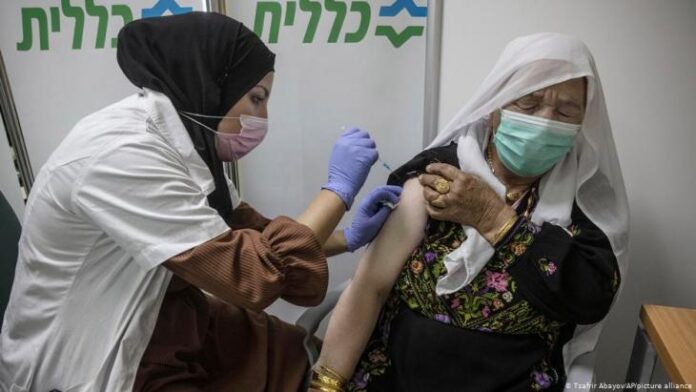 JERUSALEM: Amnesty International on Wednesday called on Israel to provide coronavirus vaccine doses to Palestinians in the occupied West Bank and Gaza, saying the Jewish state was obligated to do so under international law.

The Palestinian Authority (PA) in the West Bank, which is home to some 2.8 million Palestinians, has not publicly asked for Israeli assistance in vaccine procurement.

Hamas, who control the Gaza strip, where about two million Palestinians live, are said to be highly unlikely to publicly coordinate with Israel in any vaccination effort.

But UK-based rights group Amnesty said that Israel needed to “stop ignoring its international obligations as an occupying power and immediately act to ensure that Covid-19 vaccines are equally and fairly provided to Palestinians living under its occupation in the West Bank and the Gaza Strip.”

The PA has said that Palestinians in the West Bank and Gaza will be vaccinated through the United Nations-backed COVAX program.

The Palestinian health ministry said Monday that it expected to receive its first vaccine doses next month through COVAX.

Israel began inoculating its citizens, including Israeli settlers in the West Bank, on December 19, starting with medical workers and the over 60s and has so far injected more than a million people.

Prime Minister Benjamin Netanyahu said Saturday he hoped that within a month 2.25 million Israelis — a quarter of the population of nine million — would have received the two shots of the Pfizer-BioNTech jab needed for optimum effect.

As of Tuesday, Israel’s health ministry had confirmed 451,000 cases of the virus since the outbreak of the pandemic, with over 3,400 deaths.

The Palestinian health ministry has confirmed more than 100,000 cases in the West Bank, including 1,100 deaths.

Israel occupied the West Bank and the Gaza Strip in the 1967 Six-Day War.

Israel has since withdrawn from Gaza but maintains a tight blockade on the strip, which it says is necessary to contain Hamas, an armed group that has fought three wars with the Jewish state since 2008.

The PA has said that it has made contact with potential vaccine suppliers, but its health ministry said it would struggle to store the Pfizer-BioNTech vaccine in the requisite sub-zero conditions.