Despite the pandemic, Mushtaq Panjwani has managed to sell a number of franchises

Pakistan lacks the cafe culture that is so prevalent in other countries. The coffee bars and cafes that do exist generally focus more on serving fresh, hot food, desserts, and coffee, and generally prefer that you have your meal, talk to your friends, and head on out as soon as you’re done. It is a loud, rambunctious, usually friends-and- family oriented setting.

Coffee Wagera, an up and coming small to medium sized enterprise in Karachi, is trying to change that. A completely locally grown brand, Coffee Wagera aims to be the kind of place where you can walk in, plug in your laptop, order a drink, put your head down, and get some work done for the next few hours. Essentially, a very relaxed, laid back, environment designed for people looking for that work location that is not home but not an office.

What makes Coffee Wagera even more interesting is the fact that they are already offering franchises for their coffee shops, because they believe their brand is the Starbucks style coffee franchise that Karachi has been lacking for years. Normally, local chains shy away from opening franchises because of concerns about quality control, and franchises are limited to large international names like McDonalds, KFC, Subway, Pizza Hut, Burger King, and Miniso. Even with coffee, franchises like Second Cup and Dunkin Donuts have now existed here for a while. Very few would say that a franchise of Coffee Wagera comes to mind as an investment opportunity, but it might be worth looking into.

Mushtaq Panjwani, who prefers to go by his nickname ‘Mush,’ was working in sales as a trainer primarily based in Hong Kong. There, he was accustomed to working from coffee shops while traveling. So on a visit back home to Karachi, when some work came up, Mush packed his bag and set out to find a coffee shop to set up camp in and get cracking.

“I went to a famous coffee shop in Karachi hoping I could get some work done the same way I have in different countries. However, when I got there I realized there were no power sockets near tables, the Wi-Fi was terrible, the coffee was outrageously expensive and more importantly, the condescending staff did not appreciate the idea of someone staying long and working,” he says. 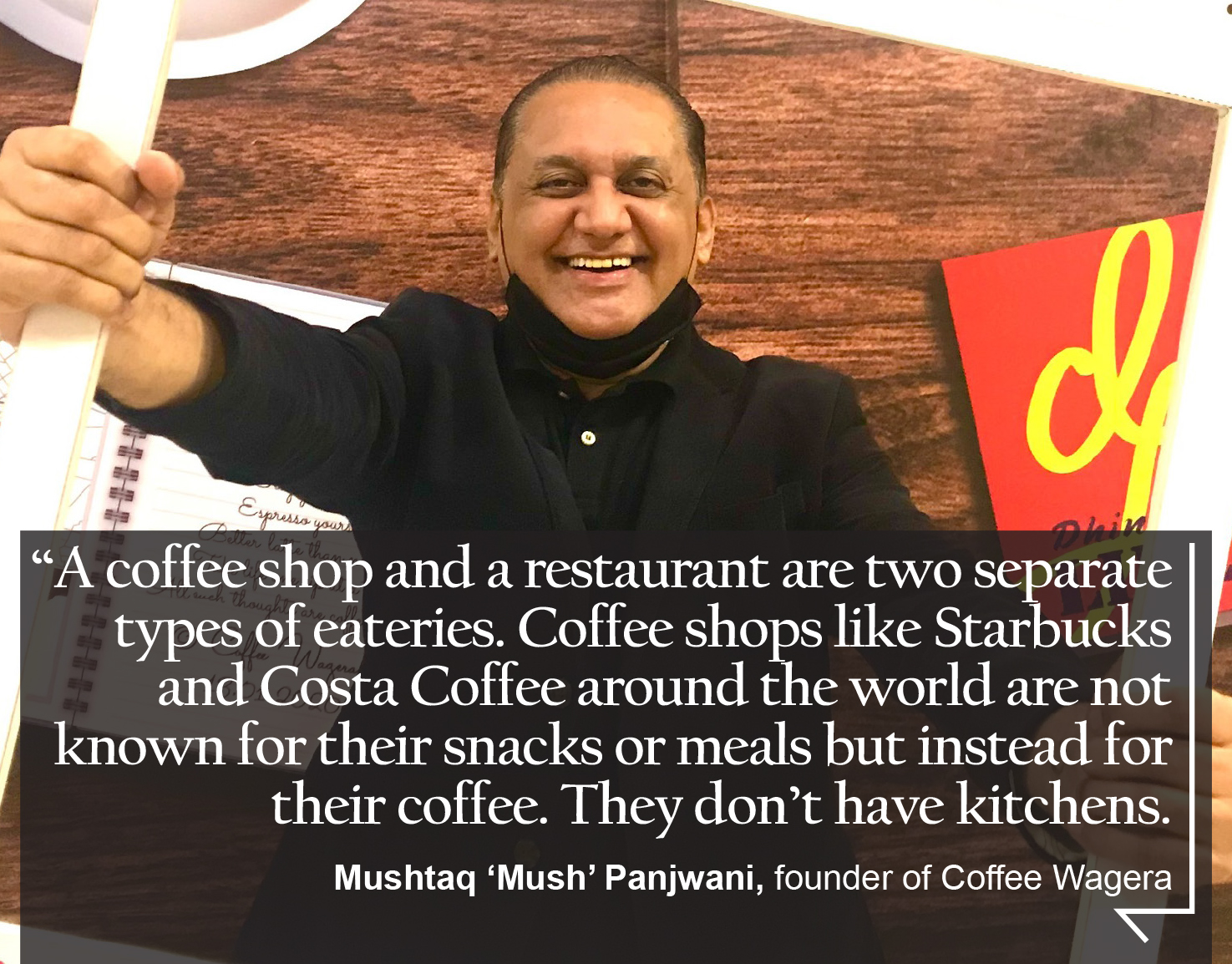 But in that moment, Mush did not feel wronged, instead he felt like he had stumbled on to an opportunity. “A coffee shop and a restaurant are two separate types of eateries. Coffee shops like Starbucks and Cost Coffee around the world are not known for their snacks or meals but instead for their coffee. They don’t have kitchens. At most they’ll have small items to nibble on,” he says.

“That was a eureka moment because I realized the problem was that I was sitting in a restaurant that also serves coffee. The coffee shop model like one experiences at Starbucks or Costa just doesn’t seem to exist in Karachi.”

The first Coffee Wagera outlet opened up in Badr Commercial after Mush went through Barista training and did his research. There were plenty of critics of the idea. Mush says 39 out 40 people he ran the idea by said it was doomed. The logic they gave Mush was that there was no money to be made with just coffee and without food, and that people would begin to loiter. But Mush powered ahead, and gave himself the title “Chief Happiness Officer ” of Coffee Wagera. A little cringey, it still shows the kind of positive attitude he had that has made Coffee Wagera a success. 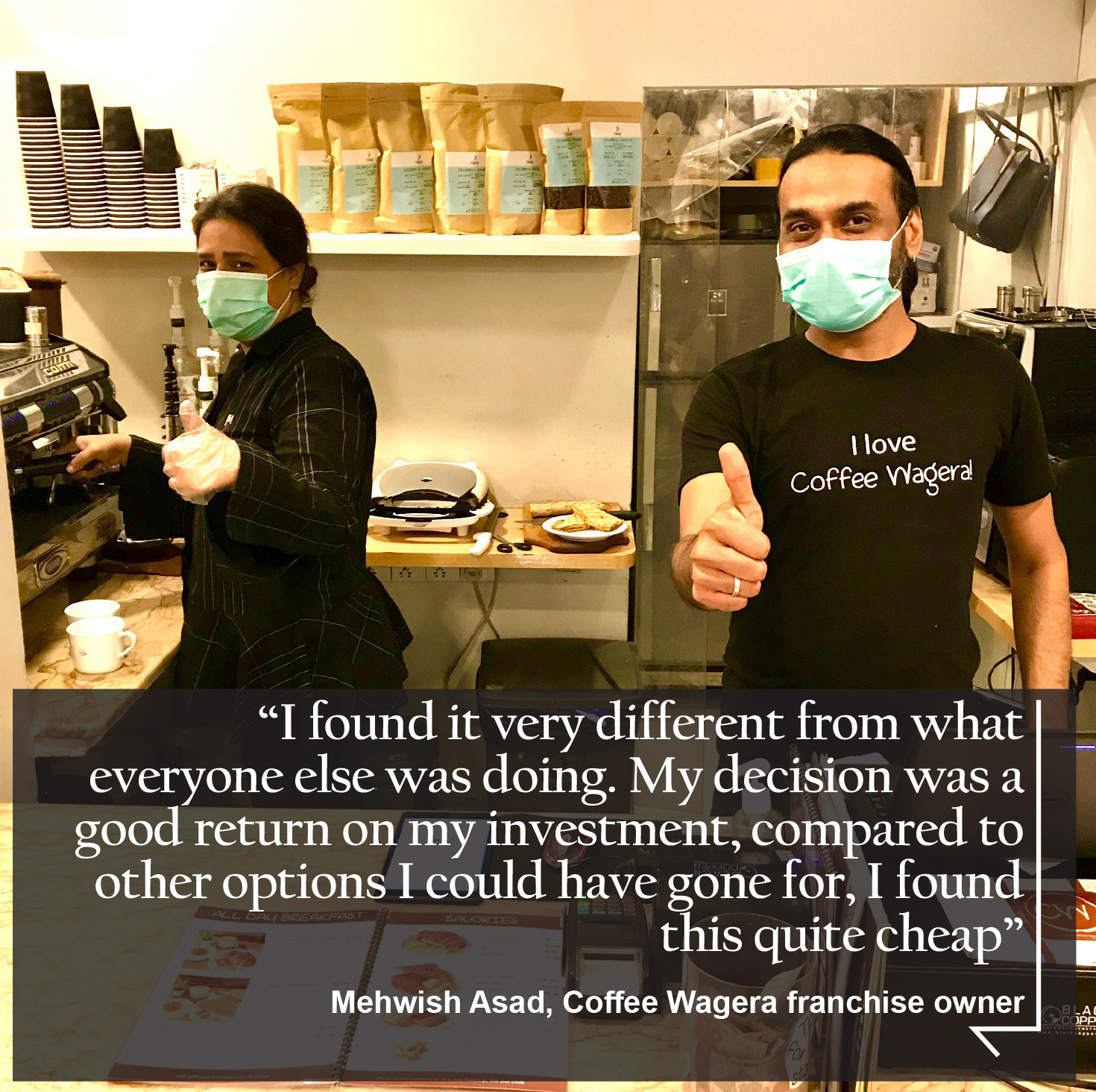 “I knew I had to think big. I knew that the longer one sits, the more likely they are to order more drinks or a light snack. The model worked across the globe, it could work here too.” Despite the fact that Mush was able to open up an outlet, he decided that he would only keep the business running if it was able to break even within three months, which it luckily did. The next goal was to make sure the franchise model would be set up within a year. That goal was also met.

So how much does it cost to franchise?

Another way is much cheaper than running a coffee shop is to franchise a cart called Coffee Wagera on Wheels. The franchising cost and setup cost is Rs1 million each, meaning Rs2 million in total in addition to 10% royalty on sales. The Coffee Wager website also mentions kiosks as a franchising opportunity with the same cost of Rs2 million.

The eligibility criteria is also fairly simple. You need to be fully committed to the restaurant franchise with no other job or business, have enough money to go through with the investment, and have a passion for coffee, customer service, and social entrepreneurship.

The cost of setting up a Coffee Wagera franchise is relatively cheaper than opening up a restaurant precisely because you do not need to set up a kitchen. “All our snacks are provided by female entrepreneurs after a strict check,” explained Mush. “This helps us empower women. We go through a rigorous process to select vendors and they supply to all our branches. This also helps achieve uniformity across all branches.”

The coffee shop also hopes to bring down waste. In order to do this they do not sell water bottles. Instead, all outlets have a dispenser and clean glasses for people that choose to stay in and work or just grab a cup of coffee. Moreover, in order to eliminate further waste, the brand does not serve paper sachets of sugar with coffee, instead they have liquid sugar syrup at the counter. Mush says people that choose to franchise with us should also be motivated towards reducing waste and being inclusive employers.

The brand goes as far as possible to discourage takeaway and rewards customers with a discount if they bring their own cup, and penalizes them by charging extra for disposable takeaway cups. Mush believes steps like these are good for the environment and he feels his business should play his part.

How successful has franchising been?

“The first franchise is always important. It helps future growth of the business,” says Mush. The first person to get a Coffee Wagera outlet was Mehwish Asad, who opened an outlet at Maskan. For her, it was a journey of first being an impressed customer, and eventually the owner of her very own Coffee Wagera franchise.

“I found it very different from what everyone else was doing,” said Mehwish. “My decision was a good return on my investment, compared to other options I could have gone for, I found this quite cheap.”

So far, Mush runs and owns one branch, i.e. the one at Badr commercial that he opened initially. The remaining branches in Gulshan Iqbal, North Nazimabad, Bahadurabad, and Clifton are all franchised. So far there is one Coffee Wagera on Wheels at I.I Chundrigar that also drops by around Bahadurabad when offices at I.I Chundrigar close. In addition, two new branches are set to open. Coffee Wagera is now expanding into Hyderabad this month, and Bahria town by July.

The fact that Mush has been able to sell off franchises despite the pandemic and the on and off nature of dine in is interesting and suggests investors find the business worth their while. “All the branches were able to break even soon after their launch. The only branch that struggled was Clifton considering it opened a week before the country went into lockdown. Despite that they were able to stick it through,” explains Mush. 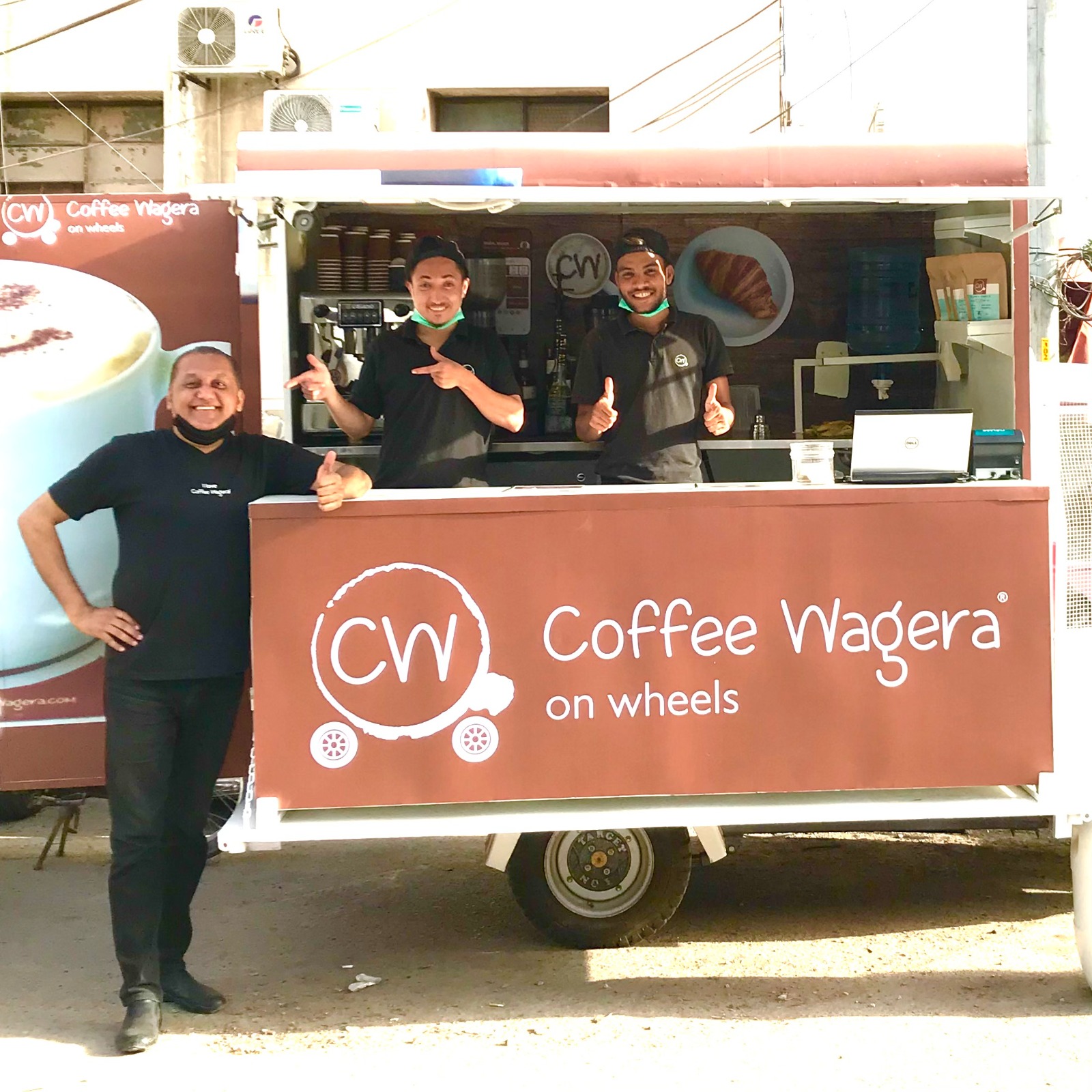 Perhaps one of the reasons for Coffee Wagera becoming so popular so quickly is that there is a growing part of the workforce that needs spaces like these. As per a report by the Pakistan Software Export Board (PSEB) titled “Freelancer: A Workforce in Acceleration”, Pakistani freelancers have earned more than $150 million in revenue during FY 2019-20 while working for 120 countries. The report also states that Pakistan ranks fourth in the world when it comes to Freelancing. Moreover, the report notes that more than 60% of freelancers in Pakistan are in their 20s and 30s.

The success of such a coffee shop largely depends on freelancers. For anyone that has experienced work from home, the struggles of a stable Wi-Fi connection remains a challenge. Moreover, the suffocation of staying at home is something that tends to dry you of your creative juices. A workspace that serves cheap coffee and does not pester you to order repeatedly sounds great for freelancers.

But could it be profitable?

If we ignore what Mush and Mehwish have to say about the business being profitable and look at the business model, it seems fair. However, there are a few concerns. For starters, when one decides to go for a franchise they expect some sort of freedom or independence.

While marketing, branding, products, menu, and overall policies are expected to be the same, the influence of the owner at the various franchises remains. Mush visits outlets every week to make sure things are on track. That, however, could also be attributed to the fact that as the Coffee Wagera franchise becomes a brand, he is trying to make himself into a brand as well.

Franchises also have to take part and organize open mic nights, training sessions for staff, and brunches to help the community. Not everyone that is looking into franchising would be that keen to do so and this may act as a deterrent.

The decision to set up a workbench was made to allow more people to work rather than hoard one entire table. This was done keeping in mind that Pakistanis are unlikely to feel comfortable sharing tables. However, the policy of allowing customers to sit for as long as they want as long as long as they make an order of Rs280 per person inclusive of GST, may also deter investors.

Like we said earlier, back in the day you would only think of international names when it came to the word franchise. However, smaller businesses have popped up and are joining the franchising bandwagon. It makes sense. If a business is successful, it has a loyal following and audience, why not scale it through franchising? From an investor’s point of view, franchising itself is a safer way to set up a business. You’re betting against failing just because of the goodwill and the fact that it is established.