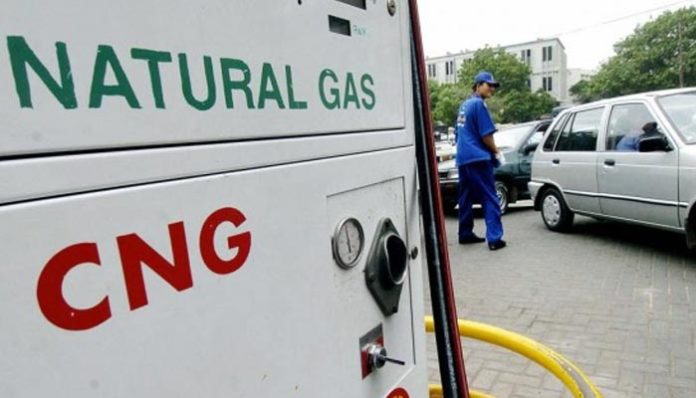 LAHORE: The All Pakistan CNG Association (APCNGA) has demanded the withdrawal of additional taxes and duties on the import of liquefied natural gas (LNG).

In this regard, Federation of Pakistan Chambers of Commerce and Industry (FPCCI) Senior Vice President Khawaja Shahzeb Akram along with other officials and former APCNGA chairman, Ghias Paracha, while addressing a joint press conference here on Tuesday, said that an increase in gas price would lead to closure of CNG stations which would lead to unemployment of millions of people.

They said that an investment of Rs450 billion would sink whereas the sector had already about Rs100 billion and no one would be able to invest such an amount in Pakistan in the future.

Paracha said that if the government removes barriers to private gas imports, and the CNG sector imports its own gas, only 50 MMCFD, the government will benefit by about Rs100 billion annually.

“Attention should be paid to exports as well as imports. The monopoly of Sui gas companies is over. The government should ensure the implementation of policies on gas distribution in which unnecessary concerns and monopolistic attitudes of Sui gas companies are countered so that private gas can come in to the country”.

Paracha added that government companies are not under their control and when gas is not imported or when there is a malfunction in the system or imports are reduced, the entire burden is put on the CNG sector.

“Currently, CNG stations in Sindh are closed even though the sector uses very little gas and this is likely to happen soon in Punjab as well.

The FPCCI official warned of taking to the streets if the government did not action to address the CNG sectors issues. “We will be forced to stage nationwide protests if the treatment towards the sector will not fair,” he said.